Senate votes down McCain amendment to the START treaty 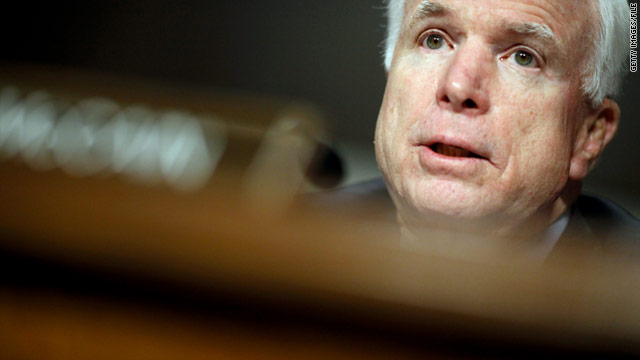 Washington (CNN) -- Senate Democrats defeated a Republican amendment Saturday that would have taken out language that recognizes a relationship between offensive and defensive weapons from the preamble of the New START treaty, the proposed nuclear arms treaty with Russia.

The vote was 59-37 against the amendment, which was put forward by Sen. John McCain, R-Arizona. He had argued the language would constrain American plans for missile defense.

The vote against the amendment helps to clear the way for the Senate to debate ratification of the Strategic Arms Reduction Treaty -- known as New START -- though it is unclear when a final vote might take place.

If the amendment had passed, Democrats had said the United States would have been required to go back to Russia and renegotiate the treaty.

The Senate Foreign Relations Committee voted for ratification of the accord in September. A vote from the full Senate has yet to occur.

The treaty would resume mutual inspections of U.S. and Russian nuclear arsenals, while limiting both nations to 1,550 warheads and 700 launchers each.

Ratification requires support from two-thirds of the Senate, or 67 votes if all 100 senators vote.

Democratic Senators John Kerry of Massachusetts and Bill Nelson of Florida have said the bill would pass if the Senate votes. But Republicans want more time to debate the bill and offer substantive amendments.

The Senate is expected to go into a closed session at some point on Monday to discuss classified information related to the treaty, two leadership aides, one from each party, told CNN.

The president previously had predicted the Senate would take up New START before the end of the year.

"The New START Treaty places no limitations on the development or deployment of our missile defense programs," Obama wrote.

"As long as I am President, and as long as the Congress provides the necessary funding, the United States will continue to develop and deploy effective missile defenses to protect the United States, our deployed forces, and our allies and partners."