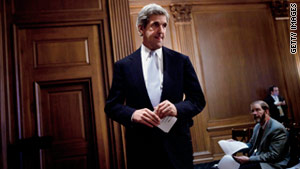 "We are certainly prepared to move for a vote," he said on the Senate floor. "I want to emphasize that there are no amendments from colleagues on the Democratic side. We are prepared to vote on this treaty ... We will take any amendment at any time."

Sen. Richard Lugar, the ranking Republican on the committee, added that the Senate needs to get some sort of an amendment or "perhaps move to close off debate and have our last 30 hours." Under Senate rules, 30 hours of debate are needed before taking up a vote. All it takes, though, is one senator to use the full 30 hours.

The treaty would resume mutual inspections of U.S. and Russian nuclear arsenals while limiting both nations to 1,550 warheads and 700 launchers each.

Sen. Bill Nelson, D-Florida, said he believes they will get the 67 votes needed to pass the treaty ratification.

McCain on the issues

Senate Majority Leader Harry Reid also weighed in, saying there is "nothing more important than the START treaty."

He is confident the Senate will move quickly through debating the treaty, but it all depends on his colleagues across the aisle.

Some Senate Republicans have opposed bringing the measure up with so little time left in the lame-duck session. Opening debate on the measure was stalled Thursday night when the chamber moved on to other issues.

Senate Democrats were trying to make progress on considering the treaty despite a Republican threat to block any legislation brought up before the Senate acts on a measure authorizing continued government spending. On Wednesday, senators voted 66-32 to take up the treaty.

The treaty cleared the Senate Foreign Relations Committee in September and has been endorsed by leading Republican figures, including former President George H.W. Bush and Lugar of Indiana.

Republicans had pledged to block consideration of any other legislative items until passage of both the spending measure and a tax package negotiated by the White House and congressional Republicans. The current resolution authorizing government spending runs out Saturday, requiring congressional approval of a new one to cover the rest of the fiscal year.

Sen. Jon Kyl, R-Arizona, told reporters Wednesday that a rushed schedule to debate the treaty would prevent Republican senators from being able to offer substantive amendments that require serious debate. He expressed "great frustration and disappointment" with what he called the refusal of Reid and Senate Democrats to put off the debate until there is time to do it properly in the new Congress that convenes in early January.

However, Senate Democrats said Kyl and Republicans have been given plenty of opportunities to discuss and influence the treaty, and now must show that they truly want it to go forward instead of continuing to delay it.

Ratification requires support from two-thirds of the Senate, or 67 votes. Democrats currently control 58 seats and need nine Republicans for ratification. In the new congressional session, the Democrats will have only 53 seats and would need 14 Republican votes to ratify the treaty.