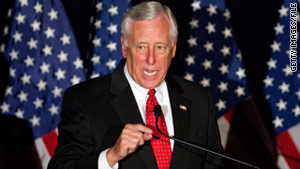 Washington (CNN) -- Both the Senate and the House of Representatives on Friday passed a short-term spending bill that would fund the government through Tuesday night.

President Barack Obama is expected to sign it soon.

Earlier in the day, House Majority Leader Steny Hoyer asked that action be taken in order to keep government running as negotiations in the Senate broke down Thursday night.

The Maryland Democrat said that rather than keeping House members waiting to vote on the larger $1.1 trillion bill -- since there is still no deal in the Senate -- leaders decided to move ahead with the temporary extension.

Spending authorization bills are necessary to keep the government running, and the current resolution expires on December 18. Both chambers had to approve a common approach to prevent the government from shutting down after that date.

The House passed a previous resolution that authorizes spending at the same level as last year until September 30, when fiscal year 2011 ends.

Hoyer's move comes after Senate Majority Leader Harry Reid conceded Thursday night he lacked the votes to bring up a $1.1 trillion spending bill designed to fund the federal government for the rest of the current fiscal year.

Hoyer said he hoped that after the House passes its version, they'll go home for the holiday and then come back if they need to match their bill to whatever the Senate passes.

Audible groans could be heard on the House floor, to which Hoyer responded: "Now, there are a lot of grumbling on my side. I appreciate your courtesy on your side."

He added that "I know there are at least 434 of my colleagues who are not happy about anything right now. I want you to know I will make that a unanimous judgment."

On Thursday night, Reid's shift culminated a Republican effort to kill the spending bill and likely put off major spending decisions for the rest of fiscal year 2011 until a more conservative Congress convenes in January.

The Senate spending bill, drafted by Democrats and Republicans on the Appropriations Committee, was a more flexible appropriation measure that would have given government departments more leeway in how they spend their budgets.

Reid said, if you looked up hypocrisy in the dictionary, "under that would be people who ask for earmarks but vote against" in the final bill.

Republicans "hate to vote for them but love to get them," he added.