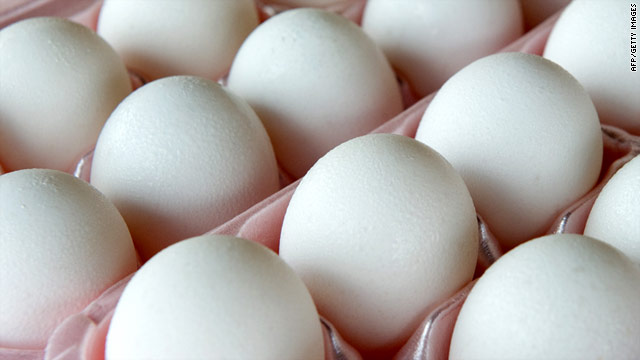 The salmonella outbreak that occurred over the summer resulted in the recall of more than 500 million eggs.
STORY HIGHLIGHTS

Washington (CNN) -- A sweeping food safety bill that passed the House and Senate earlier this year before stalling because of a legislative technicality now will likely die because Republicans object to giving it quick approval in the waning days of the congressional session, Senate leadership aides on both sides of the aisle said Friday.

The bill, designed to increase government inspections of the food supply in the wake of recent deadly food borne disease outbreaks, originally passed with wide support in the both chambers. However, it needs approval again because it violated a Constitutional requirement that bills that raise revenue initiate in the House.

To pass it a second time, Democratic leaders attached it to a giant government-funding bill but Republicans blocked that measure Thursday, in part because it contained billions of dollars in earmarks.

Democrats then wanted to attach it to a narrower government-funding bill that is expected to pass Saturday but Sen. Tom Coburn, R-Oklahoma, warned he would object if they did. A GOP leadership aide told CNN it would be impossible to approve the food bill quickly unless all Republicans support doing so.

Coburn has said he opposes the bill because, he claims, it spends billions and increases government regulations without actually making the food supply safer.