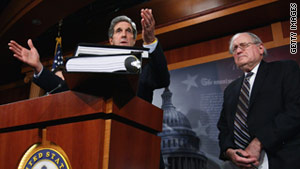 Sen. John Kerry speaks Wednesday at a news conference, where he urged passage of the START treaty.
STORY HIGHLIGHTS

Washington (CNN) -- The Senate began formal debate Thursday on a new nuclear arms treaty with Russia, a top presidential priority that conservative Republicans had tried to block in the current lame-duck session of Congress.

However, the chamber moved on to other issues on Thursday night, leaving open the question of when it would vote on ratifying the pact.

With the current lame-duck session of Congress approaching conclusion, Senate Democrats were trying to make progress on considering the treaty despite a Republican threat to block any legislation brought up before the Senate acts on a measure authorizing continued government spending.

On Wednesday, senators voted 66-32 to take up the Strategic Arms Reduction Treaty, known as New START, which would resume mutual inspections of U.S. and Russian nuclear arsenals while limiting both nations to 1,550 warheads and 700 launchers each.

The accord cleared the Senate Foreign Relations Committee in September, and has been endorsed by some leading Republican figures, including former President George H.W. Bush and Sen. Richard Luger of Indiana, the ranking GOP member of foreign relations panel.

In a recent Washington Post editorial, five big guns of Republican foreign policy -- former secretaries of state Henry Kissinger, George Shultz, James Baker, Lawrence Eagleburger and Colin Powell -- urged their fellow Republicans to support the treaty, which they say is "is clearly in our national interest."

Republicans had pledged to block consideration of any other legislative items until passage of both the spending measure and a tax package negotiated by the White House and congressional Republicans. The current resolution authorizing government spending runs out Saturday, requiring congressional approval of a new one to cover the rest of the fiscal year.

Reid said Thursday the Senate will remain in session to complete its work, even it means cutting into the upcoming holiday recess originally scheduled to begin Saturday. Debate on the START accord could resume Friday and continue next week, he said, adding that Republicans can offer amendments if desired.

Reid has insisted that he has sufficient support to ratify the treaty. But some Senate Republicans have opposed bringing the measure up with so little time left in the lame-duck session.

Sen. Jon Kyl, R-Arizona, told reporters Wednesday that a rushed schedule to debate the treaty would prevent Republican senators from being able to offer substantive amendments that require serious debate. He expressed "great frustration and disappointment" with what he called the refusal of Reid and Senate Democrats to put off the debate until there is time to do it properly in the new Congress that convenes in early January.

However, Senate Democrats said Kyl and Republicans have been given plenty of opportunities to discuss and influence the treaty, and now must show that they truly want it to go forward instead of continuing to delay it.

Ratification requires support from two-thirds of the Senate, or 67 votes. Democrats currently control 58 seats and need nine Republicans for ratification. In the new congressional session, the Democrats will have only 53 seats and would need 14 Republican votes to ratify the treaty.