Senate Democrats give up bid to pass $1.1 trillion spending bill 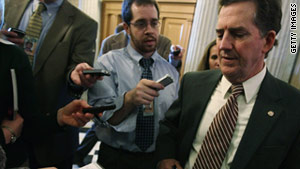 Republican Sen. Jim DeMint of South Carolina has said he might ask that the bill be read aloud.
STORY HIGHLIGHTS

Washington (CNN) -- In a dramatic twist played out on the floor of the Senate, Majority Leader Harry Reid conceded Thursday night he lacked the votes to bring up a $1.1 trillion spending bill designed to fund the federal government for the rest of the current fiscal year.

Reid, D-Nevada, accused Republicans of withdrawing previously pledged support for the bill, and said he would work with the Senate Republican leader to draft a short-term spending measure that would keep the government running beyond Saturday, when the current spending authorization resolution expires.

"A number of Republican senators told me they'd like to see this pass, but they can't support it," Reid said, adding that nine GOP senators who previously told him they backed the bill had changed their stance.

The shift announced by Reid culminated a Republican effort to kill the spending bill and likely put off major spending decisions for the rest of fiscal year 2011 until a more conservative Congress convenes in January.

The House of Representatives has passed a resolution that authorizes spending at the same level as last year until September 30, when fiscal year 2011 ends. The Senate spending bill, drafted by Democrats and Republicans on the Appropriations Committee, was a more flexible appropriation measure that would have given government departments more leeway in how they spend their budgets.

Sen. Dick Durbin, D-Illinois, earlier called the GOP hypocritical, noting that a large number of the earmarks in the bill had been previously requested by Republican members. Durbin also said the legislation had been set at $1.1 trillion in order to satisfy McConnell's demands.

This is "the very same number" the Republican leader insisted upon, Durbin said.

Reid said, if you looked up hypocrisy in the dictionary, "under that would be people who ask for earmarks but vote against" in the final bill. Republicans "hate to vote for them but love to get them," he added.

Reid framed the dispute over earmarks as one tied to the government's separation of powers, and said he didn't understand why self-proclaimed conservatives would oppose the practice.

Taking away earmarks is "a way for the executive branch of government to steal" congressional powers, he said. "I do not want to give up more power to the White House, whether it's George Bush or Barack Obama."

The rise of the conservative Tea Party movement influenced what happened on the issue. South Carolina GOP Sen. Jim DeMint, a leading voice of the Tea Party movement, had threatened to force the almost 2,000-page bill to be read out loud before it could be debated.

Reading the bill was expected to take more than two days, endangering progress on other issues as the lame-duck session headed to conclusion.

Spending authorization bills are necessary to keep the government running, and the current resolution expires on December 18. Both chambers will have to approve a common approach to prevent the government from shutting down after that date.