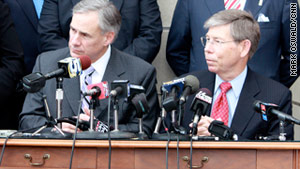 Pensacola, Florida (CNN) -- Opponents of this year's sweeping health care law challenged its validity in a Florida courtroom Thursday, pressing ahead on a second front with their campaign to reverse it.

Just days after a Virginia judge found unconstitutional a key provision of the Affordable Care Act, a judge in Florida heard another challenge to the law, from lawyers representing the attorneys general of 20 states.

In the Virginia case, the judge struck down the "individual mandate" requiring most Americans to purchase health insurance by 2014, saying the Constitution does not give the government the authority to order individuals to buy something if they didn't want to. In the Florida case, opponents are targeting not only that individual mandate, but also the law's requirement that each state expand Medicaid to cover more of the low-income uninsured.

"It's an enormous burden on the states, that they never agreed to," Florida Attorney General Bill McCollum said outside the Pensacola courthouse. The Medicaid expansion, he said, amounts to "the compulsion and coercion of the states, in violation of the 10th Amendment."

Defending the law for the Justice Department, Ian Gershengorn argued that the expansion is no different from previous expansions of Medicaid coverage, which withstood court challenge.

Under the law, the federal government is supposed to pay states for most of the cost of the Medicaid expansion -- an estimated 95 percent over the first five years, according to an analysis by the Kaiser Family Foundation. But Texas Attorney General Greg Abbott estimated the expansion could cost his state up to $25 billion over 10 years.

On the issue of requiring the uninsured to buy health insurance, U.S. District Judge Roger Vinson seemed receptive to questions about its fairness. "There are lots of alternatives to that," he said, "without imposing on liberties or freedom of choice."

"There are some people who have a different way of dealing with a situation, and that is being taken away from them," he said.

Vinson then asked whether the government also had the power to require individuals to purchase broccoli, because it could improve health and lower medical costs overall.

"If you go by the tenor of the questions he asked, you'd have to think that he would strike down the [individual] mandate, and uphold the Medicaid requirements," said Prof. Randy Barnett of Georgetown Law, who supports the challenges to the law. "But I don't know that you can really fairly judge what a judge is going to do based on the questions he asks in court."

Judge Vinson did not say when he would rule on the government's motion seeking dismissal of the case.

After the hearing, Attorney General Abbott told reporters, "there are millions of people in their twenties who don't need access to health care," and they shouldn't be forced to buy coverage they don't want. "It is liberty and freedom which is being fought for in this courtroom today," he said to the applause of supporters.

But in an interview Monday with CNN affiliate WLFA, President Obama said the requirement is justified for the overall good.

"All we've said is, everybody has to get some basic insurance, so that we're not paying for you when you get sick," he said. "It's the right thing to do, and I'm confident that the courts will uphold it."

Legal experts expect challenges to the health care law to ultimately end up before the Supreme Court, though that could take at least a year or two.

The mandate on individuals to buy insurance is not scheduled to go into effect until 2014. But if that portion of the law is struck down, analysts say it would make it difficult to pay for the law's other, more popular provisions.

In the meantime, the public will already benefit from several other provisions of the law, according to White House health care policy director Nancy-Ann DeParle. Those include requirements that insurers offer coverage to children of beneficiaries until age 26; not deny coverage for pre-existing conditions; and not place a lifetime cap on benefits.