Former FBI agent to be top Republican on House Intelligence 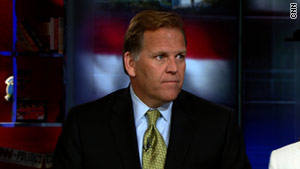 Rep. Mike Rogers, R-Michigan, has been a vocal critic of the Obama administration's policies on terrorism.
STORY HIGHLIGHTS

Washington (CNN) -- Rep. Mike Rogers, a former FBI agent and vocal critic of the Obama administration's dealing with terrorists, will head the House Intelligence Committee when Republicans take control of the House next year.

Incoming House Speaker John Boehner announced Wednesday his choice of the Michigan Republican to lead the panel which oversees the secret work and the budgets of the 16 agencies and departments which make up the intelligence community.

Rogers is not one to mince words. He has made it clear where he stands on a number of fronts which could be a thorn in the side of the Obama administration. He doesn't think the Guantanamo Bay detention facility in Cuba should be closed. Rogers wants terror suspects to be considered enemy combatants who would not be read their Miranda rights and would be put on trial before military tribunals held at Guantanamo.

Rogers has accused the administration of treating terrorism as "lawfare" instead of warfare.

"We do not need Eliot Ness on the battlefield; what we need is Gen. George S. Patton," said the lawmaker.

The five-term congressman is a former FBI agent and has been critical of the bureau for its failure to solve its computer problems and its inability to integrate its 2,800 analysts.

In a prepared statement, Boehner said, "Mike Rogers' experience and expertise has proven invaluable throughout his tenure on the Intelligence Committee."

The outgoing ranking member of the committee called Rogers the right man at the right time for the job. Rep. Pete Hoekstra, R-Michigan, said "intelligence is at the tip of the spear in the fight against terrorists and America's foreign adversaries, and Mike is a strong leader to conduct oversight of such a critical issue to the U.S."

Since the Intelligence Committee is considered a select committee, the speaker has the sole responsibility of appointing its chairman.

But Boehner did seem to offer Thornberry a possible consolation prize. The speaker-elect said he will recommend to the Republican Steering Committee that Thornberry be appointed the vice chairman of the powerful Armed Services Committee.