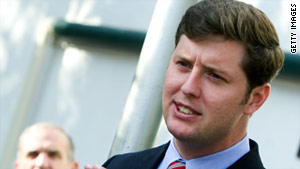 Rep. Patrick Murphy, D-Pennsylvania, is pushing a stand-alone measure to repeal 'don't ask, don't tell,' rather than adding it to the Pentagon budget as the Senate did.
STORY HIGHLIGHTS

The House previously passed a repeal of the ban as part of a larger defense spending authorization bill, but the measure stalled last week in the Senate.

The new measure is a so-called "standalone" bill -- not tied to any other legislative items.

It is set to come to a vote on Wednesday, according to a senior House Democratic aide.

"The time to repeal 'don't ask, don't tell' has come," said Rep. Patrick Murphy, the Pennsylvania Democrat responsible for formally introducing the measure. "I'm proud to stand with the secretary of Defense, the chairman of the Joint Chiefs of Staff, and the majority of service members and the American public who all support repeal of this discriminatory policy that harms our national security and military readiness."

Top Democrats on Capitol Hill are struggling to find a way to push through a repeal before the end of the current lame duck congressional session. A Republican filibuster in the Senate has forced Democrats to find the necessary GOP support to get the 60 Senate votes required to proceed. The Democratic Senate caucus has 58 members, meaning they need at least two Republicans to join them to overcome the filibuster.

A handful of moderate Senate Republicans have expressed support for a repeal of "don't ask, don't tell," but are pushing for more time to debate the initiative. They have also stood by a GOP pledge to obstruct all Senate business until a resolution is reached on extending the Bush tax cuts and authorizing government spending for the rest of the fiscal year.

The more conservative incoming Congress -- which will be seated the first week of January -- is considered far less likely to overturn the Clinton-era ban.

Defense Secretary Robert Gates has warned that court challenges to "don't ask, don't tell" could force an immediate repeal of the policy, rather than the process in the legislation that would allow the military to manage the change on a longer timetable.