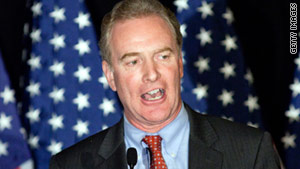 Washington (CNN) -- House Democrats will allow a vote on the tax compromise reached by President Barack Obama and Republicans but will try to change the deal, especially an estate tax provision they believe is beneficial to the wealthy, one of their leaders said Sunday.

Rep. Chris Van Hollen of Maryland, who heads the Democratic Congressional Campaign Committee, told reporters that the package will get a vote in the House despite a threat by House Democrats last week to prevent it from reaching the floor.

"What form the bill comes to the floor in is something that's under discussion and debate," Van Hollen said, later adding that the House "will have an opportunity to work its will, but there will be as I say discussions as to the form it takes when it arrives for that vote."

Two other House Democrats, Rep. Jim McDermott of Washington and Rep. Elijah Cummings of Maryland, agreed on CNN's "State of the Union" that the House would take up the package, even though some Democrats would vote against it.

The remarks showed a softening in the sometimes vitriolic Democratic opposition so far to the tax and benefits package that Obama announced last week.

At a closed meeting Thursday where members shouted "just say no," House Democrats decided against even considering the deal, raising questions about Obama's influence in his own party and whether any agreement with Republicans could win congressional approval in the current lame-duck session.

On Sunday, White House senior adviser David Axelrod ruled out any major changes to the tax package, telling CNN's "State of the Union" that it was time to move forward on a compromise that includes elements distasteful to each side.

The focus must be on what is best for the country right now, rather than scoring political points or settling political scores, Axelrod said.

"You can focus on what you don't like and ... cut your nose off to spite your face, and that would be the wrong thing to do," Axelrod said, adding that he expected Congress to approve the deal.

"I think the Senate is going to take this bill up tomorrow, and we believe that when it comes back to the House, that we will get a vote, and that we'll prevail there," Axelrod said, adding that "everybody understands what it would mean for the economy if we don't get this done."

Axelrod appeared on the CNN program and other Sunday talk shows in the latest salvo by the Obama administration in a battle for public and political support for the plan that combines extended tax cuts from the Bush era with extended unemployment benefits, tax breaks and the payroll tax holiday intended to bolster a sluggish recovery from economic recession.

House Democrats initially opposed the package because it includes a two-year extension of lower Bush-era tax rates for everyone, including millionaires. They support the stance Obama has championed for years -- extending the current lower tax rates only for those earning up to $200,000 a year, or families earning $250,000, while letting rates for higher incomes return to 1990s levels.

However, Senate Republicans have refused to accept any difference in tax treatment for the wealthy, demanding that all current rates be extended. Last week, they blocked Democratic measures in the Senate to limit the extended tax cuts to income levels below $1 million a year.

With the tax cuts expiring at the end of the year, and Republicans able to block any legislation in the Senate, Obama and Democrats face a fast-approaching deadline to reach a deal or see tax bills increase for everyone.

Asked about the possibility of dropping provisions opposed by liberal Democrats, such as extending Bush-era tax cuts for the wealthy, Axelrod said the main components of the deal with Republicans must remain in place.

"This is what has been negotiated. This is what the Republican Party in the Senate accepted," Axelrod said.

He acknowledged the deal includes provisions "that many are aggrieved about," and that critics on both sides of the political spectrum were "howling."

"This is what compromise is about," Axelrod said, adding: "We have to move forward."

Van Hollen said the main concern of House Democrats is the estate tax, which expired for 2010 but was set to be restored in 2011 at a rate of 55%, with inheritances under $1 million exempted. A bill that passed in the House set the tax rate at 45% and exempted inheritances under $3.5 million, while the provision in the tax deal would exempt estates up to $5 million and set the tax rate at 35%.

"It did not have to be part of the overall deal," Van Hollen said of the estate tax provision pushed by Republican Sen. Jon Kyl of Arizona. "The Republicans never said if we don't get the Kyl estate tax that the deal is off the table."

Van Hollen said the estate tax provision would cost $68 billion, or $25 billion more than the rate and exemption in the House bill, while affecting only 6,600 additional families.

However, the presumptive incoming chairman of the House Budget Committee, Republican Rep. Paul Ryan of Wisconsin, told "Fox News Sunday" that the estate tax provision in the agreement amounts to a tax increase and therefore is a major concession from his side that can't be changed.

"We're at zero and then we're going to go to a 35 percent tax rate," Ryan said. "That's not enough for Chris and other House Democrats and they're willing to scuttle the entire agreement, an agreement which has bipartisan support in the Senate, an agreement with the president of the United States to get this moving and prevent tax increases from hitting our economy, which would be very destabilizing, very volatile, in January."

Axelrod said Obama has been talking with members of Congress about the compromise package to urge their support, emphasizing that the plan contains "an enormous amount of good" that "will help their constituents."

Obama, who campaigned against extended tax cuts for the wealthy, still opposes that policy, Axelrod said. However, he added, it was more important for Obama to keep another campaign pledge -- no tax hikes for working-class Americans -- in order to safeguard economic recovery by securing a deal now that maintains current lower tax rates for everyone.

Austan Goolsbee, the chairman of Obama's Council of Economic Advisers, told NBC's "Meet the Press" that Obama will be in a stronger negotiating position on the tax rate issue in 2012 if the economy continues to recover as expected.

Republicans argue that no one's taxes should go up as the nation recovers from the deepest recession since the Great Depression, Goolsbee noted. The improved economic conditions in two years' time would focus the debate on the benefits of tax cuts for the rich and force Republicans to defend them, "and they will not be able to do that," he said.

Sen. Dick Durbin of Illinois, the chamber's No. 2 Democratic leader, told CNN's "State of the Union" that the compromise was necessary, no matter how much liberal Democrats or others dislike it.

"When I try to project the thinking of many in the House, they really have sacrificed for this president," Durbin said, adding that many Democratic House members "paid a dear price for it in the last election" by voting for health care reform, the economic stimulus bill and other items on the Obama agenda.

Now, he said, "it appears this agreement doesn't honor what we think are the true values and principles of our party" because it extends tax cuts to the wealthy, which he called "the one defining issue, the real difference between Democrats and Republicans in terms of economic justice."

"We have to accept the reality that, if we want to change Washington and continue to move in the right direction, we need to stand together," Durbin said. "And sometimes the accommodations that we make, the compromises that we make may be painful, but we've got to eat the spinach and keep moving on. It's going to be a good dessert when it's over if we can say that we've worked together for the working families across America."

The Congressional Budget Office said last week that the tax deal would add $893 billion to the deficit over the next five years, with the bulk of increase from loss of revenue -- $756 billion.

Most Republicans appear to support the agreement. In the weekly GOP address Saturday, incoming Rep. Kristi Noem of South Dakota said, "It's certainly encouraging to see that Obama has proposed a potential agreement to stop all the tax hikes scheduled to take effect on January 1st."

At the same time, some conservatives are challenging the plan over the deficit hit. Sen. Jim DeMint, R-South Carolina, vowed last week to prevent a Senate vote on it, noting that conservative candidates campaigned on the issue of opposing anything that increased the deficit.

However, Durbin told CNN that Senate Minority Leader Mitch McConnell, R-Kentucky, had guaranteed that his caucus would permit the bill to come before the chamber.

"We will need Republican support to pass it" because of opposition by some Democrats, Durbin noted, adding that McConnell "has promised" the support would be there.

On Friday, Obama enlisted former President Bill Clinton to help sell the compromise. After meeting with Clinton at the White House, Obama brought him to the briefing room to tout the proposal to reporters, even backing off after a brief introduction to let Clinton do the talking and take questions.

"I personally think this is a good deal, and the best we can get," Clinton said, arguing that the combination of payroll tax cuts, unemployment insurance benefits and various tax credits would help the economy grow.

Acknowledging that the Republican insistence on extending tax cuts to the wealthy would help him personally, Clinton said the compromise meant that both sides had to accept provisions they disliked.

"There's never a perfect bipartisan bill in the eyes of a partisan," Clinton said. "I believe this will be a significant net-plus for the country."