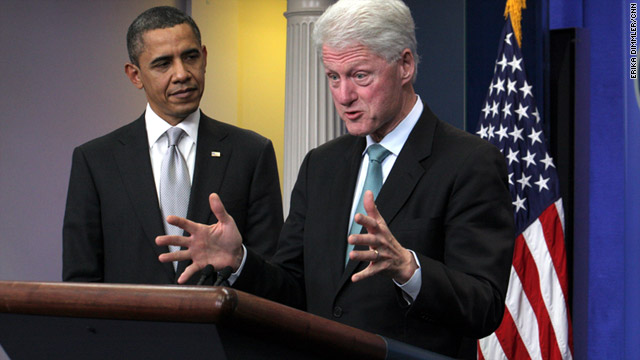 Washington (CNN) -- The Congressional Budget Office released its score Friday on the tax plan hammered out between Republicans and President Barack Obama, showing a $893 billion hit on the deficit over the next five years.

The bulk of the deficit increase comes from loss of revenue -- $756 billion -- with the rest coming from additional direct outlays.

The 13-month extension of unemployment benefits adds less than $57 billion to the deficit.

The highest price item is the extension of the Bush-era tax cuts, which will add more than $400 billion to the deficit, followed by the payroll tax holiday at about $225 billion.

After meeting with Clinton at the White House, Obama brought him to the briefing room to tout the proposal to reporters, even backing off after a brief introduction to let Clinton do the talking and take questions.

"I personally think this is a good deal, and the best we can get," Clinton said, arguing that the combination of payroll tax cuts, unemployment insurance benefits and various tax credits would help the economy grow.

Acknowledging that the Republican insistence on extending tax cuts to the wealthy would help him personally, Clinton said the compromise meant that both sides had to accept provisions they disliked.

"There's never a perfect bipartisan bill in the eyes of a partisan," Clinton said. "I believe this will be a significant net-plus for the country."

It was the latest salvo by the Obama administration in a battle for public and political support for the plan that combines extended tax cuts from the Bush era with extended unemployment benefits, tax breaks and the payroll tax holiday intended to bolster a sluggish recovery from economic recession.

House Democrats declared Thursday they opposed the package because it would extend the lower Bush-era tax rates for millionaires. They support the stance Obama has championed for years -- extending the current lower tax rates only for those earning up to $200,000 a year, or families earning $250,000, while letting rates for higher incomes return to 1990s levels.

However, Senate Republicans have refused to accept any difference in tax treatment for the wealthy, demanding that all current rates be extended. With the tax cuts expiring at the end of the year, and Republicans able to block any legislation in the Senate, Obama and Democrats face a fast-approaching deadline to reach a deal or see tax bills increase for everyone.

Earlier Friday, Obama told National Public Radio that the tax and benefits package would gain congressional approval because "nobody -- Democrat or Republican -- wants to see people's paychecks smaller on January 1 because Congress didn't act," Obama said in an interview with National Public Radio.

"And I think that the framework that we've put forward, which says not only that people's taxes don't go up on January 1, but also that we extend unemployment insurance for a year, that we make sure that key provisions like the college tax credit, the child tax credit, the earned-income tax credit are included -- that that framework is going to serve as the basis for compromise," Obama said.

The debate over taxes in the waning days of a lame-duck session of Congress illustrated the mistrust and animosity that has built up in the deeply partisan environment on Capitol Hill.

Rep. Gary Ackerman, D-New York, told CNN Friday that the tax plan will need Republican support to pass so that voters in 2012 will know it was not Democrats who approved the measure's projected $857 billion cost.

Obama will have to "get more Republicans than Democrats to make it go through," Ackerman said.

So far, Republicans "haven't said that they're all going to vote for it. They haven't said how many votes they're going to provide," Ackerman said. "This is on our (Democrats') watch. Then they're going to attack us in the next election for increasing the deficit when most of them are going to vote against it. ... Why should the Democrats get all the blame? The Republicans are very good at this. ... They get the credit for everything we do. We get the blame for everything they did that went bad."

Also Friday, conservatives Republicans questioned the tax and benefit package, warning it went against the campaign mantra from November of holding down the deficit.

U.S. Rep. Michele Bachmann, R-Minnesota, told CNN that the package would increase the deficit, adding that "investors are reacting to the increases in the deficit and so we're concerned about that. We want to get on a sound financial footing."

Sen. Jim DeMint, R-South Carolina, vowed earlier this week to filibuster the tax and benefit package to prevent a vote on the Senate floor. He noted that those who ran from the right in the election had said they would oppose anything that increased the deficit.

The Senate will consider the tax package first. On Thursday, Senate Majority Leader Harry Reid, D-Nevada, released the first version of legislation to implement the negotiated deal and said the first vote on it, a procedural one to open debate, would occur Monday.

The Senate version made public by Reid was largely the same as the deal announced by Obama, but it added a one-year extension of a program that provides cash grants in lieu of a tax credit for construction of new solar and wind energy projects. The Treasury Grant Program was part of the 2009 economic stimulus bill.

White House Press Secretary Robert Gibbs told reporters Friday that the additional clean energy provision added $3 billion to the cost of the package. Meanwhile, a letter to House Democratic leaders signed by at least 79 Democratic members called for the provision to be extended for two years.

The negotiated package includes a two-year extension of Bush-era tax cuts set to expire at the end of the year, as well as 13 months of unemployment benefits and a cut of 2 percentage points in the payroll tax. In addition, the plan extends current tax breaks for students and lower-income Americans, and adjusts the estate tax in a way that Democrats believe benefits the wealthy.

However, Bachmann and other conservatives complained that the compromise resurrects the estate tax, which had expired for 2010 but was set to be restored in 2011 at a rate of 55%, with inheritances under $1 million exempted. A bill that passed in the House set the tax rate at 45% and exempted inheritances under $3.5 million, while the provision in the tax deal would exempt estates up to $5 million and set the tax rate at 35%.

To Obama, the bottom line is that legislators from both parties will prevent a tax increase on January 1 by accepting the main components of the negotiated package, including the extension of unemployment benefits.

"I think that people are also going to understand that the single most important thing we can do for all of our constituencies is to make sure that the recovery that is taking place right now gets stronger," he said, adding that economists have noted the negotiated package would increase growth and could mean more jobs, a development that "has got to be the highest priority for everybody."

He called for legislators "to act responsibly and to think not in terms of abstract political fights here ... on Capitol Hill, but to think about those families that, in the middle of the holiday season, are trying to figure out -- are they still going to have unemployment benefits at the end of this month?"

"I'm confident that we're going to be able to get this resolved by the end of the month," Obama said.

Thursday's vote by the House Democratic caucus was a defiant rejection of both the agreement on tax and benefit measures, as well as what many Democrats in the chamber perceived as being marginalized in the talks by the White House.

"This message today is very simple. That in the form that it was negotiated, it is not acceptable to the House Democratic caucus," said Democratic Rep. Chris Van Hollen of Maryland, who represented House Democrats in the negotiations. He pledged to "work with the White House and our Republican colleagues to try and make sure we do something right for the economy and right for jobs."

During their meeting, caucus members chanted "Just say no," according to two Democrats in attendance, and Rep. Laura Richardson of California later asked reporters outside the room: "Did you hear us saying 'Just say no'?"

Overall, Republicans generally appear supportive of the package, which White House advisers noted gave them their two main priorities -- an extension of the lower tax rates from the Bush era to everyone, including the wealthiest Americans, and setting a lower-than-expected estate tax rate only on inheritances of more than $5 million.

Gibbs told reporters Thursday that he expected Congress to pass a package this year because the alternative was higher taxes for everyone after December 31.

Some House Democrats say they will support the tax package as a compromise made under tough circumstances.

"If it passes the Senate and this is the compromise the president of the United States has committed to, what are we going do in the House, hold this up?" said Rep. Shelley Berkley of Nevada.