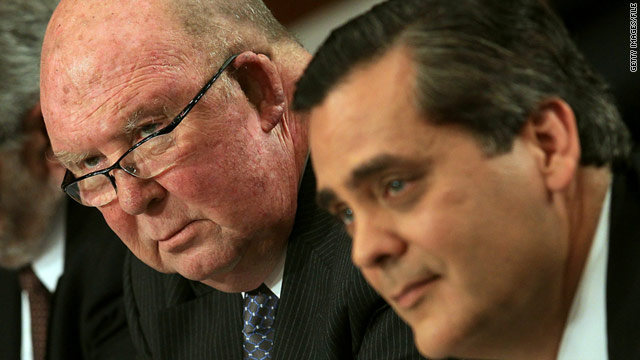 Judge G. Thomas Porteous is "forever disqualified to hold and enjoy any office of honor, trust or profit under the United States."
STORY HIGHLIGHTS
RELATED TOPICS

(CNN) -- The U.S. Senate found Federal Judge G. Thomas Porteous of Louisiana guilty on four articles of impeachment on Wednesday, which will remove him from the federal bench.

He had been accused of accepting kick-backs and lying to the Senate and FBI.

The vote makes Porteous, 63, only the eighth federal judge in the nation's history to be impeached and convicted.

Porteous is also "forever disqualified to hold and enjoy any office of honor, trust or profit under the United States," Sen. Daniel Inouye said during Wednesday's Senate hearing.

The Senate adopted the motion barring Porteous from holding a future federal office by a vote of 94 to 2.

In March, the House of Representatives voted unanimously to impeach Porteous on corruption charges.

Porteous, who turns 64 this year, was appointed to the federal bench in 1994. He has not worked as a judge since he was suspended with pay in the fall of 2008, Westling said.

The most recent previous impeachment of a federal judge by the House was last year.

Judge Samuel B. Kent of the U.S. District Court for the Southern District of Texas resigned after being impeached on charges of sexual assault, obstructing and impeding an official proceeding and making false and misleading statements, according to the website of the Federal Judicial Center.