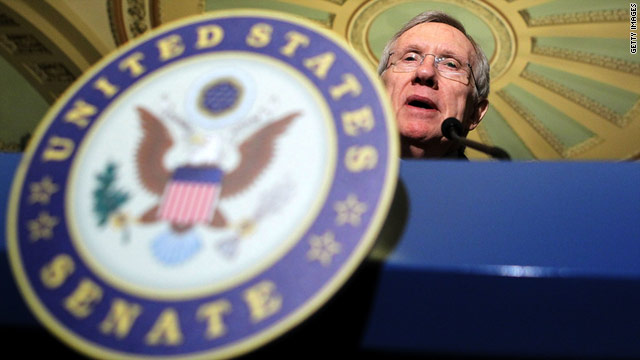 Washington (CNN) -- Senate Majority Leader Harry Reid, D-Nevada, may have to fold his efforts to push a measure legalizing online poker in the United States into a tax-cut bill, in light of strenuous opposition from Republicans.

Such a provision would greatly benefit some of Reid's biggest campaign backers -- those in the gaming industry, which has been lobbying for the change.

But when Reid was asked Wednesday afternoon whether he was still pushing the poker bill during the congressional lame-duck session, he said, "We are still working on it," according to this office.

Democratic and Republican sources had told CNN Reid was pushing for the provision to be included in the bill to extend the Bush-era tax cuts.

One of those leading the opposition is Sen. Jon Kyl, R-Arizona, who vowed to block any attempt to include the poker legalization in the tax bill.

Wednesday afternoon Kyl told CNN the measure was dead, saying, "Senator Reid has agreed with me that it will not happen."

Reid's office refused CNN's request to discuss his push for the legalization.

The support by the four-term Nevada Democrat, who won re-election in November, for the online poker measure is an apparent reversal. When Congress addressed online betting in 2006, Reid opposed its legalization.

Some House Republicans also bristled at news Reid was attempting to shoehorn the Nevada-friendly legislation into the tax deal.

"Creating a federal right to gamble that has never existed in our country's history and imposing an unprecedented new tax regime on such activity require careful deliberation, not back-room deals or earmarks for special interests," Republican Reps. Spencer Bachus of the Financial Services Committee; Dave Camp of the Ways and Means Committee and Lamar Smith of the Judiciary Committee wrote last week to Reid and Senate Minority Leader Mitch McConnell.

Between 2005-2010 Reid's campaign and his leadership political action committee received $224,450 from MGM Resorts and $113,450 from Harrah's Entertainment, making them some of his largest contributors, according to the non-partisan Center for Responsive Politics, which tracks the influence of money in politics. MGM and Harrah's did not respond to requests for comment.

"It sure looks like payback," a Republican congressional official told CNN.

According to a draft of the proposed measure obtained by CNN, large, established gambling companies would be the biggest winners if the legislation passed.

It would legalize online poker basically only in Nevada and New Jersey. The draft bill says that online poker could be offered only by businesses that have 500 or more slot machines in the same building. That includes huge casinos in Nevada and New Jersey and would make ineligible most Indian-land casinos and even long-standing poker places throughout California because they don't have slot machines.

Seventy percent of the revenues from a new internet gambling trust fund would go to the states sponsoring the poker, presumably Nevada and New Jersey. Only 30% would go to any of the other states where the person playing is based.

Also the proposal includes new rules that would make it easier to bet on horse races. Republican congressional officials suspect that is an attempt to entice support from the senator from the biggest horse-racing state, Kentucky -- Mitch McConnell.