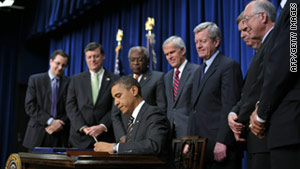 Washington (CNN) -- President Barack Obama on Wednesday signed a $1.15 billion measure to fund a settlement initially reached between the Agriculture Department and minority farmers more than a decade ago.

The 1997 Pigford v. Glickman case against the U.S. Agriculture Department over claims of discrimination against black farmers was settled out of court 11 years ago. Under a federal judge's terms dating to 1999, qualified farmers could receive $50,000 each to settle claims of racial bias.

"It's vindication and justice for black farmers," said John Boyd, founder and president of the National Black Farmers Association, when the bill won congressional approval last month. "This is what I wanted. I wanted a final restitution from the government so the black farmers can move on."

Attorney General Eric Holder has called the settlements "historic" and said they "offer a new relationship between many deserving Americans and the federal agencies that play an important role in their lives," while Agriculture Secretary Tom Vilsack said last month the measure would help his department "move beyond this sad chapter in our history."

Boyd acknowledged that the $50,000 compensation for eligible farmers will far exceed the amounts of individual loans many were denied under discrimination cited in the case. However, he said, no amount of money could properly compensate for the discrimination experienced by black farmers.

He rejected claims by Republican critics of the settlement that the claims process was fraudulent.

Vilsack's statement when the bill won congressional approval also rejected the fraud claim, saying, "the bill that passed the Senate and House includes strong protections against waste, fraud, and abuse to ensure integrity of the claims process."