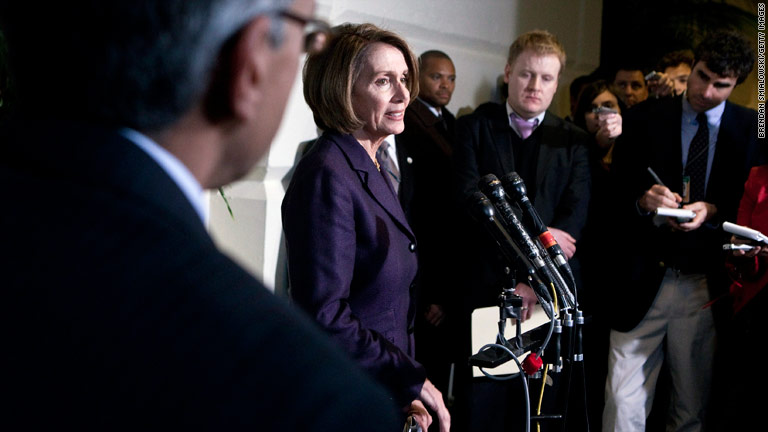 Washington (CNN) -- House Democrats vented their frustrations with President Barack Obama's tax proposal at a closed-door meeting Tuesday night, with rank-and-file members slamming the White House for leaving House Democrats out of final negotiations, and agreeing too quickly to a GOP proposal on the estate tax.

According to several Democratic members and aides, much of the discussion centered on the addition of the estate tax exemption to the package extending all the Bush-era tax cuts for two years.

Pennsylvania Democrat Allyson Schwartz said, "My sense is people are not happy with this," telling reporters that Democrats plan to "push back at little" at the White House to try to change the estate tax back to the version that passed the House. Schwartz said if the administration agreed to do that, she could support the package, but she could not predict how many other Democrats would do the same.

How might the poor fare in tax cut deal?

Explain it to me: Bush-era tax cuts
RELATED TOPICS

Liberal Democratic Rep Anthony Weiner of New York called the estate tax provision "one of the biggest problems, because that was the one we had the most leverage on."

According to a senior House Democratic aide, Democratic Rep Chris Van Hollen of Maryland, who represented House Democrats in discussions with the administration and Republicans, said the decision to accept the GOP estate tax proposal was "an unnecessary giveaway to Kyl."

GOP Sen. Jon Kyl of Arizona, who was negotiating for Senate Republicans, sponsored an estate tax bill that is essentially the same as the deal outlined by Obama.

About 20 House Democrats lined up at microphones at the evening meeting to complain about the president's proposal. According to the senior Democratic aide, in addition to concerns about the substance of the proposal, equally upsetting to attendees was how "House Democrats were left out of the process at the end."

The aide added, "they view it as a trend," noting that it started with the president's stimulus package. "The House always seems to get rolled," the aide said.

House Speaker Nancy Pelosi "didn't really weigh in either way" during the meeting about how members should vote on the president's plan, according to the aide, "but she certainly wasn't cheerleading for it."

But Pelosi made it clear Democrats were unhappy, telling reporters outside the meeting, "I think it's fair to say that there is a certain amount of unease with the proposal that was put forth by the president." She also noted that the estate tax benefits a much smaller number of families than the middle-class tax cut.

The senior Democratic aide conceded that despite the threats to vote against the plan, it's also a reality that the proposal could still pass the House. "This gets done, but does not get done with a majority of Democratic votes," the aide said.

Hoyer didn't directly answer whether he believed House Democrats could make significant changes to the administration's plan, saying, "I think it's under discussion," but he added, "the majority of the House is still Democratic"