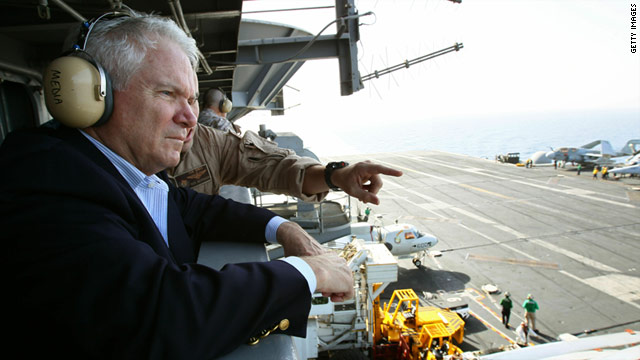 During a visit to the USS Abraham Lincoln, an aircraft carrier deployed in the Persian Gulf, Gates also made clear that even if the Senate approves a measure already passed by the House to end the controversial 1993 policy, it would be some time before the military fully implements a repeal.

Persian Gulf or Arabian Gulf? Debate is on

"One of the virtues of the legislation that's in front of the Congress right now is that it gives the president and me and the chairman of the Joint Chiefs of Staff latitude in how long we take to prepare for this and how long it actually would be to be implemented," Gates said in response to a question from personnel deployed on the vessel.

"Before a change in the law, we would have to certify that we've made enough preparations that it wouldn't affect unit cohesion, morale, retention and recruiting, and so on," he continued. "The legislation would give us great deal of flexibility. I am not particularly optimistic, though, that it will get done. We'll see."

Facing a diminished majority in the Senate next year due to losses in the recent mid-term congressional elections, Democrats hope to pass a broad defense authorization bill that includes the "don't ask, don't tell" language in the current lame-duck session of Congress that lasts until early January.

Republicans opposed to repeal are trying to strip the "don't ask, don't tell" language from the defense authorization bill. Having gained six Senate seats in the election to reduce the Democratic-controlled majority to 53-47 in the next congressional session, the Republicans know they'll have a better chance of blocking repeal then.

Last week, leaders of the different branches of the U.S. armed forces gave sharply divergent answers to the Senate Armed Services Committee when asked about the consequences of repeal. They appeared united in their belief that a repeal ordered by congressional legislation would be better than a court ruling that would require immediate implementation.

Gates said Monday that he agreed with the service chiefs, based on the acknowledgement that the policy would end at some point, one way or another.

"A change in this law is inevitable," Gates said. "Their concern is whether it ought to be done now when the force is under so much stress. With such continuing rotations or deployments, still having the war in Afghanistan and 50,000 troops in Iraq and their view is that it ought to by and large, it should come, but not now."

The process for repeal contained in the legislation before Congress, which was worked out by Gates with President Barack Obama and Joint Chiefs Chairman Adm. Mike Mullen, would provide time for proper implementation, Gates said. "If the legislation passes, we have to put in place all the training. I think it will take time to do that," he said, later adding: "I just hope they give us the time to implement it in a thoughtful way so that it doesn't impact our people in the service and it doesn't lessen morale, unit cohesion, combat capabilities and our ability to retain and recruit the people we need."

Obama, Mullen and Gates all support a repeal of the policy.

Army Chief of Staff Gen. George Casey said a repeal of the policy could be implemented with a "moderate risk to our military effectiveness and the long-term health of the force." "I believe the law should be repealed eventually," he said, but the question "is one of timing." Casey said he "would not recommend going forward at this time, given everything the Army has on its plate."

Air Force Chief of Staff Gen. Norton Schwartz said he believes the law should be repealed "at some point ... perhaps 2012" but that it would not be prudent to pursue "full implementation (of repeal) in the near-term." Chief of Naval Operations Adm. Gary Roughead recommended a repeal of the policy, noting that 76% of sailors are either neutral or feel positively about a repeal of "don't ask, don't tell."

Arizona Sen. John McCain, the committee's top Republican, said at Friday's hearing that the divergent military opinions reinforced his view that more debate is warranted. He also predicted that 41 other senators -- enough to prevent the issue from coming up for a final Senate vote -- would oppose legislation repealing "don't ask, don't tell." However, Michigan Sen. Carl Levin, the Democratic chairman of the committee, said he remains a staunch of advocate of a repeal of "don't ask, don't tell."

Mullen told the Armed Services Committee last Thursday that he believes that even among those combat forces, a transition to a new law is possible.

"Should repeal occur, some soldiers and Marines may want separate shower facilities. Some may ask for different berthing. Some may even quit the service. We'll deal with that. But I believe, and history tells, that most of them will put aside personal proclivities for something larger than themselves and for each other."