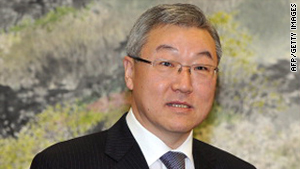 (CNN) -- South Korea's foreign minister headed Sunday to Washington, in preparation for much anticipated talks with his U.S. and Japanese counterparts about the tense situation in and around the Yellow Sea.

Speaking shortly before his departure from Incheon International Airport, Foreign Minister Kim Sung-hwan said the three attendees will discuss coordinating their outreach with other nations, according to Seoul's state-run Yonhap news agency.

"How to draw cooperation from the international community and neighboring countries in dealing with the North's attack and its uranium enrichment program and, particularly, how to cooperate with China, will be the focus of the meeting," Kim told reporters.

On Monday, Secretary of State Hillary Clinton plans to meet separately with Kim and, then, Japanese Foreign Minister Seiiji Maehra. Then all three will hold discussions together at the State Department.

North Korea, meanwhile, continued its strong rhetoric Sunday, blaming its southern rival -- which, technically, it is still at war with 57 years after the Korean War truce -- for stoking tensions in the region.

Through the state-run Korean Central News Agency, Pyongyang said the "south Korean puppet group ... is getting more frantic in military provocations." The report warned that Seoul was "rapidly driving the situation on the Korean peninsula to an uncontrollable extreme phase."

These latest comments come as South Korea, the United States and Japan have stepped up their public cooperation lately, further isolating the Communist state.

On Saturday, President Barack Obama announced what he called a "landmark" trade agreement with South Korea that, he said, would bolster U.S. exports by $11 billion, support 70,000 American jobs and eliminate tariffs on over 95% of industrial and consumer goods.

Meanwhile, the United States and Japan are holding the largest ever bilateral military exercises between the two countries, according to the U.S. military. The exercises, dubbed "Keen Sword" and running through December 10, include elements throughout mainland Japan, Okinawa and the surrounding waters.

Monday's meeting between the U.S., South Korean and Japanese top diplomats, according to a senior State Department official speaking on background because of the issue's diplomatic sensitivity, aim to bring together three "cornerstones of the region."

Representatives from Russia and China -- part of the six-party talks in recent years that have focused on North Korea, and specifically its nuclear program -- were not invited to participate. But the official stressed that China, especially, should not view its exclusion as a "snub."

Even it's not represented, China is a focus of the talks. U.S. officials have been pressuring Beijing to do more to exert its influence on North Korea and urge Pyongyang to cease its aggressive behavior.

North Korean officials, themselves, have been pushing for the resumption of six-party talks including China and Russia. But the United States has thus far refused, looking first for proof that North Korea is serious about not stoking tensions militarily and stifling its nuclear programs' development.

The conflict in the Koreas has intensified since November 23, when North Korean forces launched an artillery barrage that killed four people on the South Korean island of Yeonpyeong. Pyongyang accused the South of provoking the attack, which also injured 18 people, because shells from a South Korean military drill landed in the North's waters.

The following week, members of the U.S. military joined their South Korean counterparts in a military drill that, while long ago scheduled, was meant as a show of military force.