Henry in the House: Search for Summers' successor drags on 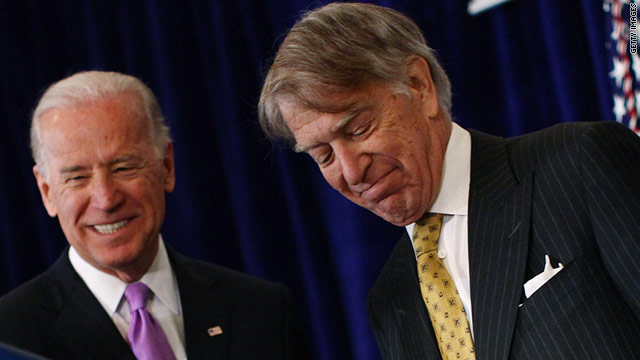 Washington (CNN) -- Investment banker Roger Altman quietly slipped into the White House early Friday morning for a second round of meetings with top officials, fueling talk inside the administration that he may be on the inside track to replace Lawrence Summers as President Obama's senior economic adviser.

But I'm starting to pick up growing frustration from Democrats inside and outside the White House that the process to replace Summers is dragging on too long at a time when Obama is supposed to be focused like a laser on creating jobs. That could be hard to do when you don't have a new team in place.

"Larry's only been leaving for what -- 14 months," one administration insider said to me. Summers officially announced plans to step down in September; he privately signaled that he was a goner much sooner.

In fact, once Obama passed over Summers for his coveted shot at becoming chairman of the Federal Reserve in the summer of 2009 by instead re-nominating Ben Bernanke, it was clear inside the administration that Summers would not be long for the council.

And yet here we are with Summers planning to officially leave in a few weeks, and senior administration officials are still hedging on whether Obama will make an announcement by the end of the year.

"I don't know when it's going to be announced," one senior administration official told me, adding that Obama is committed to not making a hasty choice. "The president's priority is finding the right person for the job."

Altman thinks he's the right man for the job, even though he has been publicly reticent about any interest in the post. He's now running Evercore Partners Inc. but is itching to get back into the Washington power game.

"He would take the job in a heartbeat," one senior administration official told me. "He's doing his best to say he's not lobbying for it, but he's been calling around positioning himself."

Altman, who served as deputy treasury secretary in the Clinton administration, met with Obama for a formal interview on Nov. 16.

The president's senior economic adviser coordinates all economic policy-making inside the White House.

When I spotted Altman walking through the White House gates without any sort of entourage just after 8 a.m. on Friday, I asked him if he would be coming in for a second interview with Obama, not yet realizing that at that moment the president was secretly flying to Afghanistan for an unannounced trip to visit U.S. troops.

Altman played it off by saying he was just "walking in" to the West Wing before hurrying off without any further comment.

But several administration officials confirmed to me that Altman was around for more consultation with White House staff about the post, a signal the administration may finally be edging toward a decision.

"Roger is not here for coffee," one senior administration official told me later in the morning. "He's here for another round" of conversations.

Administration officials say Altman is "a leading candidate" because of his gravitas and enormous credibility on Wall Street and because he could help improve the president's much talked about relationship with the business community.

A downside, however, is that picking someone so tied to Wall Street could be toxic and may only increase concerns on the left that Obama is now moving to the middle after the midterm election.

When Altman's name first surfaced earlier this month, Jonathan Cohn blogged on The New Republic's website that "the optics make no sense to me" because "making somebody from the financial industry the president's top economic adviser sends exactly the wrong message."

Another hurdle for Altman is that he's a Clinton veteran who is not really close to anyone in the Obama inner circle, other than fellow Clinton veterans like Summers.

"There's nobody who has a feel for him," is how one senior administration official put it, which is one reason there was a second visit on Friday.

A second candidate in the mix is current Treasury official Gene Sperling, yet another former Clinton administration insider. He was passed over for a senior role at the Office of Management and Budget earlier in the Obama administration.

Ironically, Sperling may suffer from being too close to the White House as a veteran of the Treasury Department for two years, even though he is not really an Obama insider in the sense that he is not pals with the president's Chicago allies.

"They need a fresh face, and Gene is not exactly that," said one senior Democratic adviser to the White House, who noted that the White House has already faced criticism for too much insularity.

For example, when Rahm Emanuel left as chief of staff he was replaced by colleague Pete Rouse. The same for retired Gen. Jim Jones, the national security adviser, who was replaced by his deputy Tom Donilon.

An interesting dark-horse candidate for the economic post being talked up outside the White House is Erskine Bowles, yet another Clinton veteran.

He has private sector experience but was also Bill Clinton's chief of staff when a Democratic administration was able to work with a Republican Congress to balance the budget, something Obama is trying to replicate (with a half-Republican Congress).

But Bowles has just wrapped up a run as co-chair of the president's debt commission, which could cut both ways. On one hand, coming off the commission Bowles could have enormous clout to prod both parties to work together on two difficult tasks, creating jobs and trying to slash government debt.

On the other hand, the blueprint that Bowles put together with Republican co-chair Alan Simpson has created a lot of enemies because of its cuts to popular programs including Social Security, not to mention the tax increases. Would Obama want to pick a fight over the job with his friends in organized labor who have vehemently opposed the Bowles-Simpson plan?

The bottom line is that with Summers about to follow a whole series of other economic officials out the door -- remember Christina Romer and Peter Orzsag? -- a decision on this post has to be made soon.

The administration official who told me it was not certain whether Obama would make an announcement by the end of the year added confidently that the president has "a team of qualified staffers to continue moving the economic agenda forward."

But a second administration official told me there is no chance that Summers will stick around past the end of the year to fill any gap.

"Larry is leaving before the holidays," said the second official. "He'll be around all next week for sure. But he will not be there past Christmas."