Nickel-and-dime crime one of nine to get presidential pardon 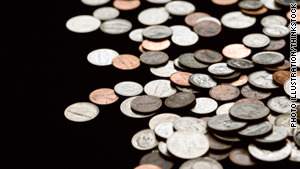 Ronald Foster was busted for mutilating pennies in 1963. For decades, he didn't know it was a felony.
STORY HIGHLIGHTS

(CNN) -- For 42 years, Ronald Foster didn't know he had a felony conviction for cutting up pennies.

It seemed like a nickel-and-dime crime at the time. President Obama apparently agreed, and on Friday he pardoned Foster and eight other people for unrelated crimes.

Foster stands out among the list of convicted thieves, drug dealers and users, and not just because his conviction is the oldest. In 1963, he was earning $82 a month as a Marine at Camp Lejeune, North Carolina, when he says he and 16 others hatched a scheme to cut pennies into dimes so they could use them in vending machines.

"We cut the lip off, and we were using them in the barracks only, in the vending machines. Washing machines, cigarette machines, pop machines," says Foster, now a retired mill worker from Beaver Falls, Pennsylvania.

But the Secret Service caught them. They were marched into a courtroom on base, where his commanding officer entered a plea on their behalf to mutilation of coins, he says.

Foster was sentenced to a year of probation and a $20 fine, and he thought the incident was behind him. He served in Vietnam the next year and left the Marine Corps 12 years later to join the Pennsylvania National Guard. He got a job at a plant that manufactures ceilings near his home in Beaver Falls, got married and had a son.

Then, in 2005, he applied for a gun permit and found out for the first time he had a felony conviction. He applied for a presidential pardon, which was officially granted Friday, in the first round of pardons during Obama's administration.

Foster was among nine people to receive pardons from the president for crimes ranging from drug possession to conspiracy. Presidential pardons are granted around the holiday season.

The following individuals were pardoned by Obama:

-- James Bernard Banks of Liberty, Utah, who was sentenced in 1972 to two years' probation for illegal possession of government property;

-- Laurens Dorsey of Syracuse, New York, who was sentenced in 1998 to five years' probation and required to pay $71,000 restitution for making false statements to the Food and Drug Administration;

-- Timothy James Gallagher of Navasota, Texas, who was sentenced in 1982 to three years' probation for possession and conspiracy to distribute cocaine;

-- Roxane Kay Hettinger of Powder Springs, Georgia, who was sentenced in 1986 to 30 days in jail and three years of probation for conspiracy to distribute cocaine;

-- Floretta Leavy of Rockford, Illinois, who was sentenced in 1984 to one year and one day in prison -- along with three years on parole -- for distribution and possession of cocaine, as well as possession of marijuana with intent to distribute; and

-- Scoey Lathaniel Morris of Crosby, Texas, who was sentenced in 1999 to three years' probation and required to pay $1,200 in restitution for passing counterfeit obligations or securities.