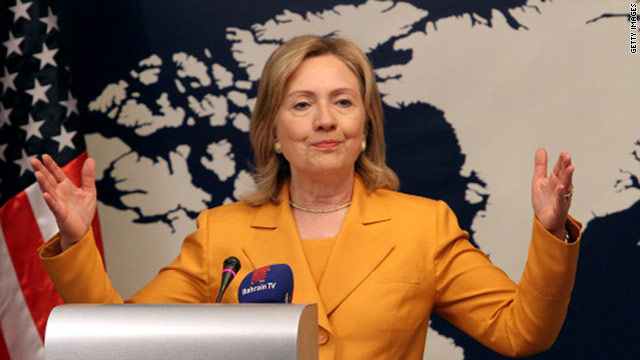 US Secretary of State Hillary Clinton speaks on Friday during a press conference at the foreign ministry in Manama while on a two-day visit to Bahrain.
STORY HIGHLIGHTS

Officials from China and Russia are not invited, even though they are members of the six-party talks on North Korea.

A senior State Department official, speaking on background because of the diplomatic sensitivity of the issue, said the meeting is meant to bring together the three "cornerstones of security in the region" and "China should not view this as a snub."

North Korea wants six-party talks to resume but the United States has refused, insisting that Pyongyang show it is serious about ending provocations and development of its nuclear program.

The United States has been pressuring China to do more to exert its influence on North Korea and urge Pyonyang to cease its aggressive behavior. Last week, North Korea launched a deadly artillery barrage on a South Korean island. Following that, the U.S. and South Korean participated in military exercise meant as a show of military force.

Clinton will begin Monday with a bilateral meeting with South Korean Foreign Minister Kim Sung-hwan and then with Japanese Foreign Minister Seiji Maehara. The three-party meeting at the State Department will follow.

Clinton commented this week on recent International Atomic Energy Agency reports suggesting there could be more than one uranium enrichment facility in North Korea. She also made a reference to Iran's nuclear programs.

"We do not object to the peaceful use of nuclear power for generating energy, every country is entitled to that," she said. "What we object to is a pursuit of nuclear weapons that can be used to threaten and intimidate their neighbors and beyond. That is unacceptable and it is destabilizing and it unfortunately will spark arms races in both regions that will make both regions even more dangerous. That's why we must stop it."

Meanwhile, the United States and Japan are holding military exercises through December 10 on military installations throughout mainland Japan, Okinawa and in the waters surrounding Japan.

The exercises, dubbed "Keen Sword" are the largest bilateral exercises ever between the United States' and Japan's military forces, according to U.S. Maj. William Vause, chief of operational plans, training and exercises. "It will better enhance both of our countries' readiness to respond to varied crisis situations."