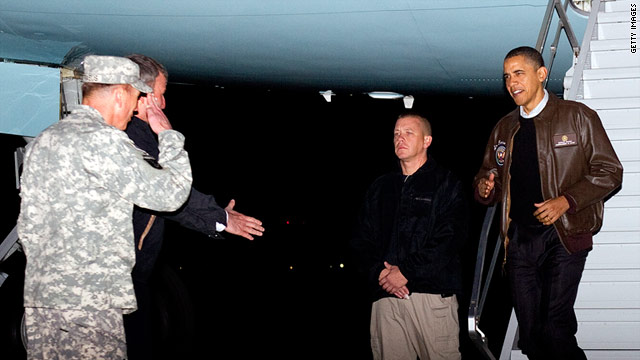 Kabul, Afghanistan (CNN) -- President Barack Obama made an unannounced visit Friday to Afghanistan, where he delivered holiday greetings to U.S. troops stationed there and promised continued full support in the war against Taliban and other extremists.

The president, who stayed for almost four hours before heading back to Washington, addressed nearly 3,900 troops at Bagram Airfield. Most of the troops were with the Army's 101st Airborne Division, though components of all the service branches were represented.

"I wanted to make sure that I could spend a little time this holiday with the finest fighting force the world has ever known," he told the enthusiastic audience. "On behalf of more than 300 million Americans, we are here to say thank you."

The president praised the troops for what he characterized as recent military gains in the nine-year conflict.

Our coalition "is strong and is growing," he said. "You're going on the offense (We're) tired of playing defense."

Obama visited a hospital on the base, where he met with five wounded soldiers and three wounded civilian contractors, reporters traveling with the president said.

He awarded five Purple Hearts and met with the surviving members of a platoon that lost six comrades earlier in the week.

Obama had originally planned to travel to Kabul to meet with President Hamid Karzai and greet U.S. Embassy staffers, but stayed at Bagram because of poor weather. He did, however, speak to Karzai for 15 minutes via secure videoconference.

It was unclear whether U.S. concerns with the Karzai government publicized this week by the website WikiLeaks were discussed. Two of the cables paint an unflattering portrait of President Karzai's half brother, Ahmed Wali Karzai, who has been accused of dealing drugs.

Prior to the latest WikiLeaks disclosures, Petraeus met with the Afghan president in an effort to ease tensions. Karzai had told the Washington Post he would like to scale back the U.S. military presence in his nation, and criticized the military presence as "intrusive" while calling Special Operations raids a problem.

In response, Petraeus told Karzai aides that the president's view could make his relationship with the United States "untenable."

A major U.S. military review of the war in Afghanistan is due this month, a year after Obama ordered additional U.S. troops to the country as part of a strategy that could bring some forces home as soon as July 2011. Officials have said the goal is to end combat operations in Afghanistan in 2014.

Friday's trip was Obama's second to Afghanistan since he became commander-in-chief. He visited Afghanistan in 2008 as a presidential candidate.