The 45-pound birds endured months of rigorous training and rose to the head of a class of 20,000 feathered friends vying for a pardon from the dreaded Thanksgiving Day buffet.

President Obama on Wednesday continued a tradition of sparing turkeys from the chopping block, as each of his predecessors since George H.W. Bush has done. The National Turkey Federation has presented a bird to the president for more than 60 years, but the early honorees often became dinner.

"It feels pretty good to stop at least one shellacking this November," the president joked.

Apple is the official National Thanksgiving Turkey and Cider is the alternate. The NTF brings two birds each year in case a backup is needed. Both get pardoned, but only one gets to be the official turkey.

The names were chosen from hundreds of submissions from students who participated in California Foundation for Agriculture in the Classroom, a program where they learned about how the turkey was raised. 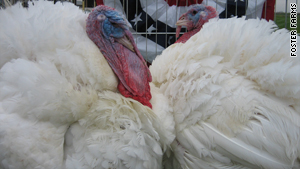 Nicholas Strain turkeys are known for their white plumage and patriotic heads.

This year's winners are Nicholas Strain turkeys, a breed that originated in California's Sonoma Valley. While the birds are a bit larger than a typical tom, they've been living off a typical diet of corn and soy beans.

The annual turkey (and his alternate) will now be living a life of luxury, but moving to the front of the flock was hard work. 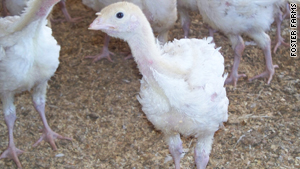 The prize turkeys were born the week of July 10.

Twenty-five birds from a hatch of 20,000 born the week of July 10 were relocated to a small ranch outside of Modesto, California, said Yubert Envia, vice president of turkey and prepared foods for Foster Farms and this year's chairman of the NTF.

Since six weeks of age, those birds have been in training, getting used to being handled and in the spotlight. They listened to music, ranging from country to rock, to get acclimated to a variety of sounds.

The turkeys toured eight schools along the West Coast before the pack was narrowed further.

Then, last Friday, the remaining birds competed in a high-stakes beauty contest.

"We had the birds walk around to make sure they had a good strut on them and they were walking well. We were looking for nice white plumage on them, good feathering and a nice fanning tail," Envia said. 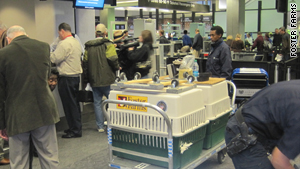 The turkeys await their flight to the East Coast.

The finalists were selected and separated for a final round of handling and two standouts were dubbed the winners.

The turkeys had two days to prepare before boarding a plane for the East Coast. (And yes, they did get their own version of a pat down).

"The birds made it great. No broken feathers or anything like that. That was a great trip for them," Envia said.

Before the White House ceremony, the birds spent time getting used to the nation's capital and relaxing at the W Hotel.

After the official pardon, the birds will travel to Mount Vernon, where they will live out the rest of their lives.

"It was George Washington that declared a day of thanks ... so what better place to retire than the home of the first president of the United States?" Envia said.

"We're pretty excited about Mount Vernon, and I think the birds are really going to enjoy themselves over there."