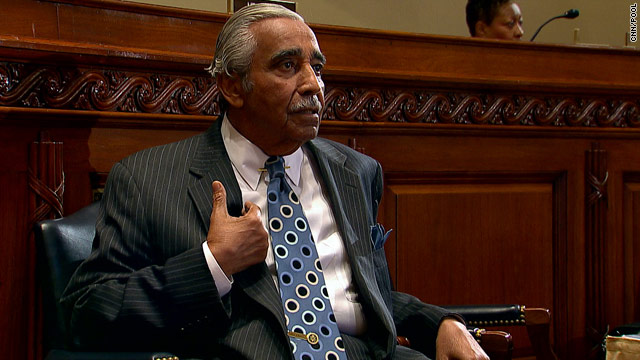 Zoe Lofgren, a California Democrat and the committee's co-chairwoman, announced the recommendation around 6 p.m. Thursday, after a day of sometimes charged and emotional comments regarding how to penalize Rangel. She said that, in addition to the censure, Rangel would have to pay restitution for any unpaid taxes and report back to the committee.

Rangel's office refused to comment after the announcement, beyond saying in a statement, "the final decision on sanctions for violations of the House rules will be made by the full House of Representatives."

On Tuesday, an ethics subcommittee found "clear and convincing" evidence of Rangel's guilt on 11 counts, including failing to pay taxes on a home in the Dominican Republic, misuse of a rent-controlled apartment for political purposes, and improper use of his office to raise funds for a public policy center named for him.

The 80-year-old Rangel, re-elected earlier this month, was cleared of a charge relating to an alleged violation of the House gift ban. He had previously been forced to step down as head of the Ways and Means Committee because of the allegations against him.

Speaking earlier Thursday to the committee's five Democrats and five Republicans, Rangel pleaded for "a drop of fairness and mercy," in part out of recognition of his lengthy public service.

In a statement later in the day, but before the censure vote came down, the Harlem congressman apologized "for the embarassment" he'd brought upon the House and asked to be judged based "on my entire record as a soldier and a dedicated public servant -- not by my mistakes."

"My actions may have been sloppy, or even stupid, but never corrupt," he said in the statement.

More serious than a reprimand and less so than an explusion, congressional censures carry no explicit penalties beyond a public admonition. The last time members of the House of Representatives were censure was in 1983, when Gerry Studds, D-Massachusetts, and Dan Crane, R-Illinois, were so punished. It generally requires a representative to stand on the floor of the House while being rebuked.

One of the Democrats -- North Carolina Rep. G.K. Butterfield -- said he disagreed with Chisam's censure recommendation.

"Censure is extreme," Butterfield said. "The evidence does not suggest corruption." Rangel has had "a distinguished career," he added.

Top Republicans, including incoming Republican speaker John Boehner, appeared to be less sympathetic. Numerous House Republicans -- as well as some House Democrats -- have called for Rangel to resign because of the ethics violations.

"It is painful for me to say this to a man I personally respect, but Mr. Rangel can no longer blame anyone but himself for the position he now finds himself in," said Alabama Rep. Jo Bonner, the ranking committee Republican. "Mr. Rangel should only look into the mirror if he wants to know who to blame."

At Thursday's hearing, Rangel said he understood that public officials "have a higher responsibility than most Americans to obey the rules, because we write them."

"There can be no excuse for my acts of omission," he said. "I've failed in carrying out my responsibilities. I made numerous mistakes."

But, Rangel argued, "corruption and personal enrichment are certainly not part of my mistakes and the [ethics committee's] chief counsel made that abundantly clear. And that was the point I was always trying to make."

"The ethics committee has not met its burden of proof in presenting clear and convincing evidence that Charlie Rangel has deviated from his sense of duty to this body and this great country," he contended.

Rangel was accompanied to the hearing by Rep. John Lewis, a Georgia Democrat and fellow civil rights movement veteran. Lewis said that while he didn't know all the facts of the case, he could testify that Rangel is committed, hardworking, and patriotic.

"Charlie Rangel is a good and decent man," Lewis said, calling him "a champion for those left out and behind." "I think I know his heart."

Rangel complained to subcommittee members Monday -- and reiterated Thursday -- that he was not given enough time to raise funds to hire new lawyers because the committee was rushing to finish its work before the current lame-duck Congress ends. His original defense team left him in September.

Lofgren, the ethics committee chairwoman, said it was Rangel's responsibility to assemble his legal team. She also noted that Rangel had received advice numerous times from the committee on how to raise funds for his defense.

Democratic Rep. Maxine Waters of California is also scheduled to have an adjudication hearing with the House ethics committee this month, on November 29. Waters has denied the allegations against her, which include steering federal bailout money to Massachusetts-based OneUnited Bank, in which her husband had a financial stake.

CNN's Alan Silverleib and Lesa Jansen contributed to this report.