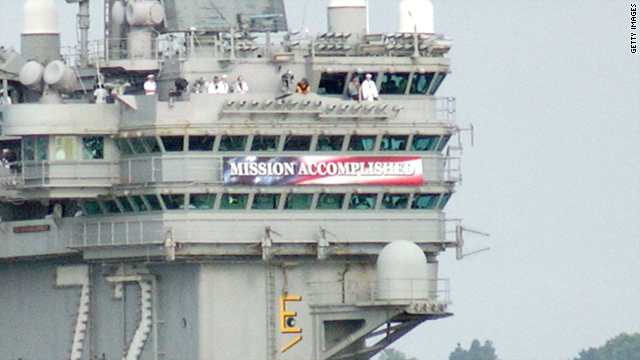 Washington (CNN) -- Politics is serious business -- but not all of the time. From the halls of Congress to the campaign trail to the international stage, there's always something that gets a laugh or a second glance. Here are some of the things you might have missed.

USA Today reports that the infamous "Mission Accomplished" banner which found its way onto the USS Lincoln during former President George W. Bush's speech on the war in Iraq, has found a home: At Bush's presidential library.

Alan Lowe, the director of the George W. Bush Presidential Library and Museum, told the paper that the banner "now sits in storage and will become part of the library's collection." A decision on how or whether to display the red-white-and-blue banner hasn't been made, said Lowe.

That's a mighty fine pizza you've got there

The verdict: A thumbs-up and a "very good."

Donald Trump's catch phrase "you're fired!" may turn into a "you're hired" if he gets his way when it comes to a 2012 run.

The business tycoon and publicity hound has once again said he's seriously thinking about running for president in the Republican field -- a move that, while still unlikely, would fundamentally change the dynamics of the race.

Possibly, according to Rep. Alan Grayson, D-Florida, in an interview with The Daily Beast's Lloyd Grove. When asked if he'd like to star in his own reality show -- following in the footsteps of Sarah Palin -- Grayson shot back "Sure ... Alan Grayson's Florida!"

Grayson made headlines when, during House health care reform bill talks, he warned that Republicans "want you to die quickly."

No fan of the 'love pat'

CBS News reports that Sen. Claire McCaskill, D-Missouri, said that new airport screening technology, which has been controversial because of alleged health risks and privacy issues, is more a blessing than a curse.

"I'm wildly excited that I can walk through a machine instead of getting my dose of love pats," she told CBS. 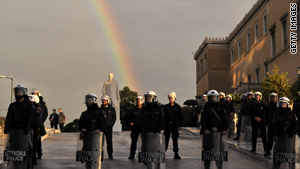 'Somewhere over the rainbow'

From Getty Images: "Riot police stand outside the Greek Parliament during a demonstration to commemorate the 1973 student revolt, on November 17, 2010 in Athens, Greece."

Behind them? A beautiful rainbow.

From Russia with puppy love

Russian Prime Minister Vladimir Putin is asking Russians to help him decide the name of his new puppy, Reuters reports.

"Anyone who wishes to can send their suggestion of a male name for the prime minister's new dog to his site," according to a government statement on its website www.premier.gov.ru.

"By the way if that gentleman does get you pregnant, your uterus is officially classified as 'The Situation Womb' " -- Jon Stewart on an abstinence ad

featuring Bristol Palin and the Jersey Shore's "The Situation."

Conan O'Brien: "Bristol Palin and the Jersey Shore's the Situation are in a new public service announcement promoting abstinence. ... Unfortunately there is an awkward moment halfway through the PSA when they have sex."

Jay Leno: "Nancy Pelosi has now been elected as the new House minority leader. Finally some change in Washington. ... She was smiling from ear to ear, which is pretty impressive considering how far her eyes have been pulled back."

David Letterman: "Happy Birthday to John Boehner ... 61 years old today. And if you want to get him something for his birthday, well you can't go wrong with bronzer."