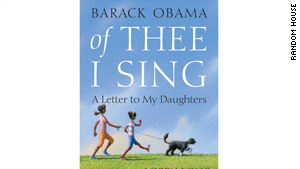 The book "celebrates the characteristics that unite all Americans," according to publisher Random House.
STORY HIGHLIGHTS
RELATED TOPICS

Washington (CNN) -- Half a million copies of a new children's book by President Barack Obama hit the shelves Tuesday.

First daughters Sasha and Malia inspired the president to write "Of Thee I Sing: A Letter to My Daughters," publisher Random House said.

The publisher describes Obama's latest book as "a moving tribute to 13 groundbreaking Americans and the ideals that have shaped our nation -- from the artistry of Georgia O'Keeffe, to the courage of Jackie Robinson, to the patriotism of George Washington."

The manuscript was completed before Obama took office in 2009, Random House said in a statement released in September.

The book "celebrates the characteristics that unite all Americans -- the potential to pursue our dreams and forge our own paths," said Chip Gibson, head of the publisher's children's books division.

Proceeds from the book, which has a suggested retail price of $17.99, will be donated to the Fisher House Foundation for a scholarship fund for children of fallen and disabled soldiers.

"Fisher House Foundation is honored to be chosen as the recipient of the author's proceeds from President Obama's book 'Of Thee I Sing: A Letter to My Daughters,'" said foundation chairman Ken Fisher.

The cover illustration shows Sasha and Malia walking across a green lawn with their pet dog, Bo.

Obama also wrote the international best-sellers "Dreams from My Father" and "The Audacity of Hope."

He isn't the only White House resident to enter the children's book world.

In 2008, HarperCollins released "Read All About It!" a book penned by former first lady Laura Bush and first daughter Jenna Bush.