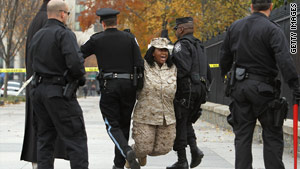 U.S. Park Police take a protester away Monday during a gay rights demonstration outside the White House.

Former Army Lt. Dan Choi, the Iraq war veteran and West Point graduate who has become the face of the movement to remove the ban, led the midday protest on the opening day of the lame-duck session of Congress, to put pressure on Democrats and the president to jettison the law before January.

Choi and others repeatedly shouted, "I am somebody! I deserve full equality!" as U.S. Park Police approached each protester with a huge pair of red shears. One by one, the police cut through the handcuffs that attached protesters' feet and wrists to the front gate of the White House.

The protesters were bound with plastic ties and carried across the sidewalk to Pennsylvania Avenue where they were arrested and detained. U.S. Park Police officers on horses and U.S. Secret Service uniformed officers lined up on Pennsylvania Avenue in front of the White House, creating a barricade for about 75 onlookers, many supportive of the protesters.

Several taunted the president, calling for him to come out of the White House and display more courage supporting equal rights for gays. One man shouted, "President Obama is afraid to act."

The president, meanwhile, was holding private meetings with nothing public on his schedule. It was a relatively quiet day for Obama, after returning Sunday from a grueling 10-day trip overseas.

As the gay advocates were dragged away from the gate, Choi and the other service members chanted, "Let us serve! Get visible! Get equal! "

One of those arrested was a Catholic priest, the Rev. Geoff Farrow, who has spoken in favor of same sex marriage.

For Choi and four other veterans, this was not their first time arrested in front of the White House. They carried out the same act of civil disobedience back in March to fight for gay service members.