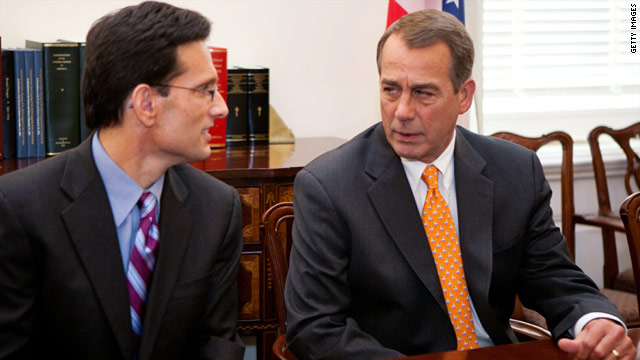 Washington (CNN) -- Less than a month after midterm elections brought a change in power in Congress, the White House and Republican leaders agree on one thing: changing the culture of earmarks.

In his weekly address, President Barack Obama called for reforming earmarks, which are funds inserted into spending bills intended for a specific program, project or purpose. Critics say earmarks often sail through without adequate review.

"Given the deficits that have mounted up over the past decade, we can't afford to make these investments unless we're also willing to cut what we don't need," Obama said.

"That's why I've submitted to Congress a plan for a three-year budget freeze, and I'm prepared to offer additional savings," he said. "But as we work to reform our budget, Congress should also put some skin in the game. I agree with those Republican and Democratic members of Congress who've recently said that in these challenging days, we can't afford what are called earmarks."

Obama said while some earmarks support worthy projects in local communities, many others do not.

The age of austerity
RELATED TOPICS

"We can't afford 'bridges to nowhere' like the one that was planned a few years back in Alaska," said Obama, referring to the infamous $400 million "bridge to nowhere" project that Sarah Palin initially supported but later killed as governor of Alaska.

"As president, time and again, I've called for new limitations on earmarks. We've reduced the cost of earmarks by over $3 billion. And we've put in place higher standards of transparency by putting as much information as possible on earmarks.gov," Obama said.

He said the administration updated the site with more information about where last year's earmarks were actually spent, and made it easier to look up members of Congress and the earmarks they fought for.

Republican House leaders are calling for a vote on an earmark ban next week when Congress returns for a lame duck session.

In a statement, House Republican leader Rep. John Boehner and Republican House whip Rep. Eric Cantor said the GOP conference will hold a vote and call on the Democratic leadership to do the same.

"Earmarks have become a symbol of dysfunctional Congress and serve as a fuel line for the culture of spending that has dominated Washington for too long," the members said in a joint statement.

They reference President Obama's voiced support for earmark reform and say Washington has previously "failed to prioritize the way that taxpayer dollars are spent."

The announcement comes as Republicans prepare to become the majority party in the House, a shift that will likely include a Speaker John Boehner and Majority Leader Eric Cantor. Earmark reform was one of the items addressed in the Republican "Pledge to America," which outlined priorities for Republicans going forward.