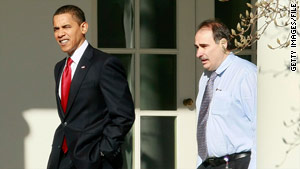 Editor's note: Ed Henry has covered the White House for CNN since March 2006. In "Henry in the House," he offers an insider's view of the Obama White House

Seoul, South Korea (CNN) -- The bottom line on the Bush-era tax cuts for the rich is that President Obama has not caved in on extending them -- yet. But check back next week when Congress returns for its lame-duck session.

In an interview in Washington with The Huffington Post, White House senior adviser David Axelrod initially sent shock waves all the way here to Seoul because of a headline that said, "White House Gives In On Bush Tax Cuts."

The story was published just as we hit the seven-day mark in this Asian tour that has run through a series of time zones, so everyone from the president on down to White House staffers and humble reporters have gotten little sleep. The standard greeting in our work space is, "Did you get any rest?" or the much simpler, "I'm hitting the wall."

When the Huffington Post item was originally posted at midnight ET Wednesday, 2 p.m. Thursday here in Seoul, all the reporters traveling with the president were busy tracking a news conference with him and South Korean President Lee Myung-bak. It was chock-full of news on a U.S.-South Korean trade deal faltering, and Obama's first comments on his debt commission's controversial preliminary blueprint to balance the budget.

For more on Obama's tour of Asia, check out CNN's White House blog, The 1600 Report.

How to balance the budget?
RELATED TOPICS

So when editors on the overnight shift in Washington noticed the story, some of us were finally catching a bit of sleep in the afternoon so we could soon get back up in time for the morning shows on the East Coast. (On these trips we practically spend more time trying to get our arms around what time it is locally and what time it is in Washington than we spend sleeping or practically anything else.)

The point is that the scream you may have heard while you were sleeping soundly back home in America was the sound of correspondents being woken up by phone calls and/or e-mails from a pesky editor -- let's call him "Tom" for argument's sake -- wondering whether we too had the Axelrod "news" from the Huffington Post.

A bleary-eyed debate quickly commenced here among reporters and White House aides about whether Axelrod really said anything new -- or whether he said anything at all since The Huffington Post had barely any quotes from the senior adviser. Instead the story mostly consisted of impressions/analysis from the site's new correspondent, Howard Fineman, who I should say at the outset is outstanding and just does not get things wrong.

But White House aides quickly insisted the story was an overreach, with Axelrod telling CNN's Gloria Borger, "I simply said what we've said before -- middle-class tax cuts should be extended permanently, but we can't afford to borrow another $700 billion to permanently extend cuts to the wealthiest. But we're willing to sit down when Congress returns and figure out a way forward that makes sense."

So let's take a close look at what Axelrod said and didn't say. Without an actual quote from Axelrod to this effect, Fineman's story asserted at the top that Axelrod "suggested" -- not that he "said" -- that "the administration is ready to accept an across-the-board, temporary continuation of steep Bush-era tax cuts, including those for the wealthiest taxpayers."

Then the story shifted to the word "said" -- again without a quote -- by Fineman adding: "That appears to be the only way, said David Axelrod, that middle-class taxpayers can keep their tax cuts, given the legislative and political realities facing Obama in the aftermath of last week's electoral defeat" in the midterm election.

Then the story quoted Axelrod as saying: "We have to deal with the world as we find it. The world of what it takes to get this done."

Axelrod added, "I don't want to trade away security for the middle class in order to make that point" about the rich getting tax cuts.

The context here that we can't forget is that Axelrod, framing the issue this way now, is a complete reversal from what Obama said at a news conference two months ago when he drew a line in the sand and said he would only accept an extension of middle-class tax cuts for families making under $250,000 a year.

"Now, that seems like a common-sense thing to do," Obama said on September 10. "And what I've got is the Republicans holding middle-class tax relief hostage because they're insisting we've got to give tax relief to millionaires and billionaires to the tune of about $100,000 per millionaire, which would cost over the course of 10 years, $700 billion, and that economists say is probably the worst way to stimulate the economy. That doesn't make sense, and that's an example of what this election is all about."

Obama later in the East Room news conference demanded: "Why hold it up? Why hold the middle class hostage in order to do something that most economists don't think makes sense?"

That may have been a pre-election blunder because at the time conservative "Blue Dog" Democrats were begging the president to cut a deal with Republicans on a one-year extension on all Bush tax cuts, including the ones for the rich. The thinking was that it would take taxes off the table as a weapon for Republicans, and it would have given conservative Democrats an accomplishment to point to that might have helped save their seats.

Since the White House is now signaling that a potential compromise is at least on the table, so shortly after a couple dozen conservative Democrats were cut down at the polls last week, I had more than one Democratic strategist tell me ruefully by phone some variation of this: If the president had just compromised before the election, how many Democratic seats in Congress would have been saved?

Maybe that's revisionist history, but the more important point is that Axelrod's comments to The Huffington Post were not really new. The president himself had already disavowed what he said at the September news conference by saying the day after the election that he was now willing to negotiate on the tax cuts for the rich -- something that had been an ironclad no before the election.

Little noticed was the fact that the president went even further than he did at that November 3 news conference -- and further than Axelrod did to The Huffington Post actually -- in his weekly Internet/radio address last Saturday.

Obama said that with all the tax cuts expiring at the end of the year, "the last thing we should do is raise taxes on middle-class families" by letting them expire.

"So something's got to be done," Obama added. "And I believe there's room for us to compromise and get it done together."

Aha -- "compromise!" A word Axelrod never used in The Huffington Post interview you will notice.

So The Huffington Post's claim that "Axelrod's remarks were the first public confirmation" of the idea that Obama would accept an across-the-board deal was not really precise.

The headline on The Huffington Post story saying the White House "gives in" on tax cuts for the rich was also a stretch. Axelrod never said -- and neither did the president -- that they're giving in just yet. They've both just said that they're ready to sit down and talk about a deal.

But let's face it -- if The Huffington Post headline had just said the White House is "likely" to give in, it would have been dead-on. After all, there's really only one way Obama is going to get an extension of the middle-class tax cuts, and that's if he gives on the tax cuts for the rich.

Don't forget that Obama's real problem in the Senate is not the GOP. The true hurdle is that conservative Democrats such as Sen. Ben Nelson of Nebraska are not on board with only passing the middle-class tax cuts. If they had given it a go, Obama might have had a deal before the election.

The most obvious clue of that fact may have come in Axelrod's very last quote to The Huffington Post, which the White House held up as a sign that the senior adviser wasn't saying anything new and was still saying Obama doesn't want to extend tax cuts for the wealthy.

"We don't want that tax increase to go forward for the middle class," Axelrod said. "But plainly, what we can't do is permanently extend these high income taxes."

But a closer look shows that you should pay attention to one key word in there -- "permanently" -- which tells us everything we need to know. Axelrod is indeed saying that if the president had his druthers, he'd prefer not to extend the tax cuts for the rich -- on a permanent basis.

The door is wide open, however, on extending those tax cuts on a short-term basis. And that's the point when you cut through all the spin.