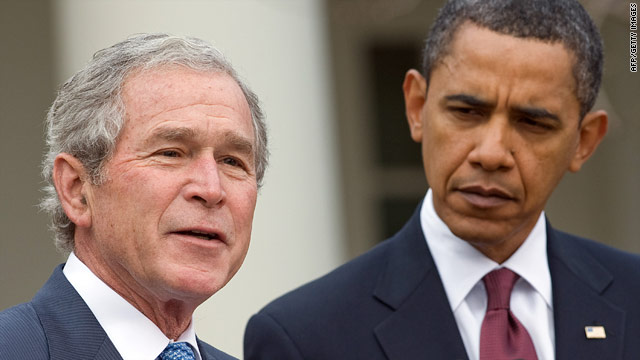 Former President Bush, at the White House with President Obama in January, has been mostly mum about his successor.
STORY HIGHLIGHTS
RELATED TOPICS

Washington (CNN) -- Politics is serious business -- but not all of the time. From the halls of Congress to the campaign trail, there's always something that gets a laugh. Here are some of the things you might have missed.

The Financial Times reports that former President George W. Bush is alleged to have told a group in 2008 that he "probably won't even vote for the guy," referring to Republican presidential candidate Sen. John McCain.

And the zinger: "I had to endorse him. But I'd have endorsed Obama if they'd asked me," according to a blog post on the Times' website.

Bush spokesman David Sherzer later told Politico that the report is "ridiculous and untrue," adding that Bush "proudly supported John McCain in the election and voted for him."

Handshake heard around the world

An Indonesian minister is under fire after shaking first lady Michelle Obama's hand during the first couple's trip to the island nation. The reason? Tifatul Sembiring is a conservative Muslim who says he avoids contact with women he doesn't know.

And he went so far as to explain on Twitter that he "tried to prevent [being touched] with my hands but Mrs. Michelle held her hands too far toward me [so] we touched," according to the New York Post.

The only problem is a video posted on YouTube shows a smiling and energetic Sembiring using both hands to shake the first lady's hand.

"Former President George W. Bush appeared on Oprah. ... When asked about being the leader of the free world, Oprah said, 'It's not bad.' " -- Conan O'Brien

CNN senior congressional correspondent Dana Bash tweeted that presumed House Speaker John Boehner said he will continue to fly commercial despite new security detail he will have as speaker -- something current Speaker Nancy Pelosi does not do.

The photo you need to see

Move over Mr. Smith -- Mr. Sullenberger has gone to Washington.

"Paladino and O'Donnell must go away: For these two Tea Partyers, amateur hour just drags on and on"

Obama riding a white horse in the buff?

The Huffington Post is out with a photo gallery of "The Most WTF Portraits Of Politicians Ever."

Bristol will dance another day

Bristol Palin was saved from elimination on ABC's "Dancing With the Stars." She survived as former football star Kurt Warner was eliminated, People.com reports.

David Letterman: "President Barack Obama is traveling. He went to India and I believe South Korea, then Japan. And he's gonna keep traveling until he finds his birth certificate."

Jay Leno: "President Obama's visit was cut short because of volcanic ash. It's the second time in a week his plane was disrupted by ash. The first time was during the midterms and the Democrats went down in flames."