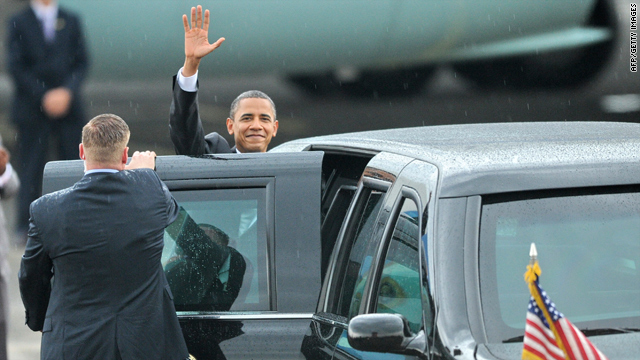 Jakarta, Indonesia (CNN) -- Even on days when he's jet-lagged and probably still reeling from that shellacking in the midterm election, President Obama can't help blurting out sometimes that the perks of being the commander in chief are pretty cool.

Obama has been planning for months now to return here to the Indonesian capital, where he spent four years as a boy. But basically, everything that could go wrong has gone wrong.

The multi-day tour that was originally planned earlier this year was supposed to include a presidential stroll down memory lane to visit his old school and other spots of personal importance. The trip was canceled twice though -- first for the health care debate and then because of the Gulf oil spill.

So Tuesday's third attempt at a visit was going to last only about 21 hours. But adding insult to injury, the quick stay became even more rushed than expected because volcanic ash spewing from Mount Merapi will force Obama's short schedule to be, well, shortened some more.

Experts say the ash can be destructive to jet engines. Administration officials said late Tuesday the president's already-quick visit will be shortened by two hours, forcing cancellation of a wreath-laying ceremony on Wednesday and causing other tweaks to the schedule.

But first the president had to deal with a driving rain as he and first lady Michelle Obama arrived here for one of the elaborate outdoor ceremonies that are a staple in Asian countries.

Then, when we got our first real glimpse of Obama beyond just the arrival photo-ops, he showed up at a joint news conference with Indonesian President Susilo Bambang Yudhoyono looking pretty tired and jet-lagged like the rest of us.

But when a reporter asked Obama to reminisce a little about his days in Indonesia, his mood seemed to brighten, as he talked about arriving in 1967 and finding the best way to get around town was by riding this "sort of bicycle rickshaw thing" in the streets.

"Sort of like little taxis, but you stood in the back and it was very crowded," said Obama. "Now as president I can't even see any traffic because they block all of the streets."

It reminded me of another rare moment when Obama let his hair down about the perks of the job while staying in one of my favorite cities, Las Vegas, Nevada, back in May 2009.

Obama was delivering remarks at a fundraiser for Senate Majority Leader Harry Reid, D-Nevada, at Caesars Palace, the casino hotel that then-Sen. Obama had grown to like during his many nights on the Strip in 2008 campaigning against Hillary Clinton in the hotly contested Nevada caucuses.

"I thought I had a pretty nice room [before]," Obama said to laughter. "But now that I'm president, they upgraded me. I got the upgrade. And it's a really nice room now."

Besides having great views of the Strip, the suite has an outdoor patio with a private pool. I guess it's the type of room reserved for movies like "Rain Man" and "Hangover" -- and traveling presidents, who even on a bad day have it pretty good.