LaHood to states: Proceed with rail projects or give up stimulus funds 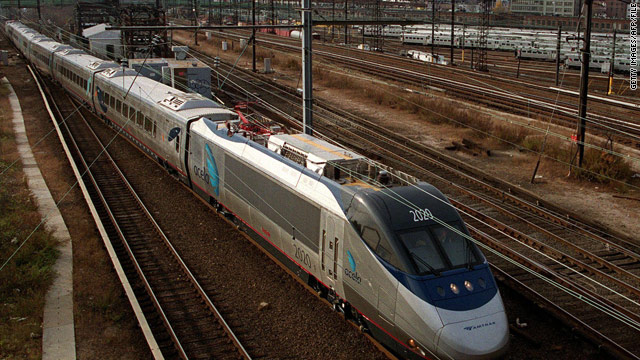 (CNN) -- In some post-election hardball between the Obama administration and newly-elected Republicans, Transportation Secretary Ray LaHood is threatening to take back stimulus funds from states if they do not follow through on proposed rail projects.

CNN obtained copies of letters LaHood sent to incoming Republican governors in Ohio and Wisconsin who have stated their opposition to rail projects already underway in their states. In the letters, LaHood said a rail link between Cleveland, Columbus, Dayton and Cincinnati in Ohio, and a high-speed rail connection between Chicago, Illinois, and Milwaukee, Wisconsin, are vital to economic growth in both regions.

Lahood wrote that he respects the power of governors to make decisions for their states, but, "There seems to be some confusion about how these high-speed rail dollars can be spent."

Related story: Is the U.S. turning a corner on high-speed rail?

To Wisconsin's Gov.-elect Scott Walker, LaHood said that none of the funds can be used for roads or any other projects. He went on to say, "Consequently, unless you change your position, we plan to engage in an orderly transition to wind down Wisconsin's project so that we do not waste taxpayer's money." That letter was delivered on Monday.

A similar letter was sent to Gov.-elect John Kasich in Ohio on Tuesday. In that letter, LaHood mentions the thousands of jobs that would be created with the construction of a rail link between the state's largest cities.

LaHood said he was aware that Kasich had asked President Barack Obama if $400 million dollars from the federal government intended to fund the passenger rail project could instead be used for road construction and freight lines. LaHood wrote, "I wanted to let you know that none of those funds can be used for anything other than our High-Speed Rail Program," and he signaled his intention to take the money back if the project doesn't move forward.

The Transportation Department has committed a total of $823 million to a 441-mile-long high-speed rail connection from Chicago to Minneapolis. But if Wisconsin balks on the section that would run between Milwaukee and Madison, the project can not be completed.

Similarly, the DOT committed $400 million to a 250-mile-long intercity passenger rail line that would run from Cincinnati, through Dayton and Columbus, and on to Cleveland.

The Transportation Secretary is in a fight to keep several proposed high-speed rail projects alive after New Jersey's Republican Gov. Chris Christie abruptly killed the nation's largest infrastructure project last month. The ARC Tunnel would have involved the construction of a second rail tunnel between New Jersey and New York and an expansion of Penn Station in New York City. It was expected to double commuter rail capacity on the Northeast Corridor, the nation's busiest rail line, and ease congestion on New Jersey's highways.

Now the feds want their money back from New Jersey. On Monday, a letter was sent from the Federal Transit Administration to New Jersey Transit, the state's public transportation authority, requesting an immediate repayment of $271 million in federal funds already spent on the project. The letter stated the funds were obligated for the ARC tunnel and because the project was terminated, the money most be returned.

New Jersey Transit officials responded by saying they are reviewing the request and they do not agree that the issue is as clear-cut as portrayed in the FTA letter.

Christie put an end to the tunnel, claiming that potential cost overruns could range from $2 billion to $5 billion, something the cash-strapped state can not afford. But USDOT officials believe any cost overruns on ARC wouldn't have exceeded $800 million.