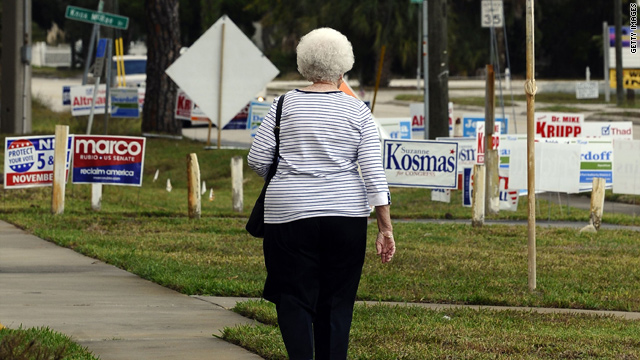 A voter walks to a polling station in Titusville, Florida, on November 2.
STORY HIGHLIGHTS

Washington (CNN) -- Republicans rode a tidal wave of senior support into control of the House, promising to cut government spending and restore fiscal sanity to Washington.

But can they deliver on that promise without cutting entitlement programs like Medicare and Social Security and angering older voters?

Seniors voted last week by an almost 60-40 split for Republican House candidates, after splitting evenly between Democrats and Republicans in the 2006 midterms. And voters 65 and older made up 24 percent of those casting votes last week.

Check out exit polls from the 2006 midterm elections

Republicans, who will control the House in the next Congress, have vowed to cut spending in the federal budget, and entitlement programs like Social Security and Medicare make up more than half of the budget. Significant cuts can't happen without addressing these programs.

Changing those programs will be nearly impossible, with advocacy powers like AARP and other seniors' groups resisting change.

The Arena: How to fix the economy

The reason Social Security reform failed was because "Americans were not fully educated in what the systemic problems were," said Bonjean, the former chief of staff to the Senate Republican conference and director of communications for then-Speaker of the House Dennis Hastert.

"Seniors seriously objected to any attempt to change it," he added.

And seniors resisted change again this year, opposing health care reform, polls showed. Republicans hammered the Obama administration and congressional Democrats on their health care reform law and have vowed to repeal it.

It was a message that caught on with seniors, political analyst Jennifer Donahue said.

"Health care reform played a large factor. ... The Obama administration appears to have gone too far too fast on health care, and especially in the minds of older voters, who already have government health care available to them."

She added that one reason seniors favored Republicans this cycle was because of the endless attack ads on the new law.

Statistics show that anti-health care reform advocates spent $94 million on ads nationwide this year, while the other side spent $19 million.

While repealing the health care reform law will be next to impossible, the sensitive subject is one that may keep seniors wary of Democrats, Donahue added.

Will the GOP take on entitlements?

"I don't see it as a top priority for Republicans going into the next Congress," he said. "I think they'll start creating a conversation, which needs to be had. Before you try to solve a problem, it will be important for Americans to understand what the problems are."

Their primary focus will be on the economy and "low-hanging fruit" items in the budget that can be cut.

"Republicans are going to focus on growing the economy, creating jobs, repealing the health care law and cutting nondiscretionary spending. They may look at waste, fraud and abuse within the Medicare program, but their No. 1 priority is to jump-start the economy and repeal the new health care law," Bonjean said.

Donahue added that even if Republicans float the idea of cutting entitlement programs, they have political cover.

"I think the Republicans have a little bit of cover because they know that a [Democratic] Senate and President Obama won't cut Medicare," she said. "So they can try to cut it and fail and that's their safety net."

Eventually, though, Congress will need to tackle the growing problems with these programs, which are pressing on the country's fiscal health.

Bonjean hinted that entitlement change won't come until the problems get really bad. Americans don't like to deal with problems, he said, until they are "front and center and almost in a crisis level -- like the economic situation we're in right now."

"When Medicare and Social Security get to such a point where it will be unsustainable, I think that's when Americans will force Congress to do something about," he added. "That's the way the country works."

What can Democrats do?

"To try and attract seniors is actually to make movement towards the center," Donahue said. "And that is a dilemma for the Democrats right now because in order to attract younger voters, they actually have to move to the left."

Democrats in recent history have had a hard time attracting seniors, so it comes as no surprise that they would face an uphill battle in this year's election.

"Seniors have been a problem for the Democrats for at least a decade," CNN polling director Keating Holland said. "Seniors routinely voted Democratic in House elections in the 1970s and 1980s, but starting in 1994 they trended toward the GOP and except for 2000, that trend has held up ever since. So there is some long-term pattern going on -- it's not a recent development."

And it was certainly seen in the 2008 presidential election, when Barack Obama lost the senior vote to Republican presidential candidate John McCain. Obama was put over the top by support from independents, younger voters and baby boomers.

"For Democrats to have succeeded with older voters this cycle, they would have really had to court them," Donahue said. "They didn't do that. Where Republicans I think had the most energy and seemed like the most effective agent of change this cycle."

CNN's Rebecca Sinderbrand and Rebecca Stewart contributed to this report.