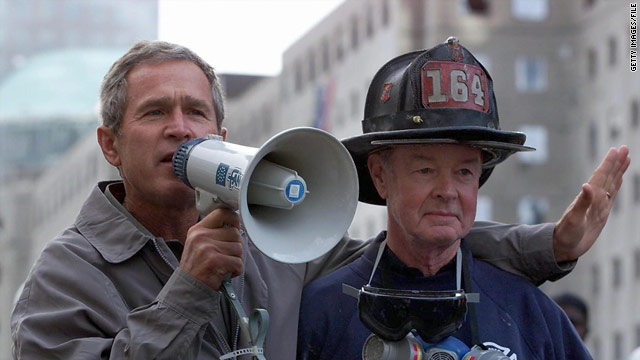 Bush with bullhorn and New York firefighter Bob Beckwith. The 9/11 attacks made his presidency's purpose clear, he writes.
STORY HIGHLIGHTS

(CNN) -- The terrorist attacks on America on September 11, 2001, gave his administration a clear goal and him the resolve to find out who was responsible and "kick their ass," former President George W. Bush writes in his new book.

In "Decision Points," Bush describes his reaction when his then-National Security Adviser Condoleezza Rice informed him of the crash of a third airplane into the Pentagon.

"I sat back in my seat and absorbed her words. My thoughts clarified: The first plane could have been an accident. The second was definitely an attack. The third was a declaration of war," the former president writes in his 481-page book, which goes on sale Tuesday.

"My blood was boiling. We were going to find out who did this, and kick their ass," Bush writes.

"In a single morning, the purpose of my presidency had grown clear: to protect our people and defend our freedom that had come under attack."

CNN on Friday obtained a copy of the book, being released by Crown Publishers.

In the book, Bush also recounts the government response to Hurricane Katrina in 2005.

He calls the response "not only flawed" but "unacceptable," and describes his own failures in this way: "As the leader of the federal government, I should have recognized the deficiencies sooner and intervened faster. I prided myself on my ability to make crisp and effective decisions. Yet in the days after Katrina, that didn't happen. The problem was not that I made the wrong decisions. It was that I took too long to decide."

Bush writes he also failed to "adequately communicate my concern for the victims of Katrina" -- a problem he calls one of "perception, not reality."

"Yet many of our citizens, particularly in the African-American community, came away convinced their president didn't care about them."

The former president recently told NBC's Matt Laurer that the "worst moment" of his administration was when rapper Kanye West declared during a Katrina celebrity telethon that "George Bush doesn't care about black people." West this week expressed a sympathetic view of Bush's reaction to the comment.

Bush writes the Katrina had a lasting legacy on his second term.

[The Katrina response] eroded citizens' trust in their government. It exacerbated divisions in our society and politics. And it cast a cloud over my second term.
--Former President George W. Bush, in "Decision Points"
RELATED TOPICS

"Just as Katrina was more than a hurricane, its impact was more than physical destruction. It eroded citizens' trust in their government. It exacerbated divisions in our society and politics. And it cast a cloud over my second term."

In "Decision Points," Bush also details how he came to utter those infamous words "Brownie, you're doing a heck of a job" about Michael Brown, the FEMA chief who was leading the government's response to Katrina in the days immediately following the storm.

Bush writes that he was in Mobile, Alabama, meeting with the Alabama and Mississippi governors and asked them if they were getting adequate federal support. "'That Mike Brown is doing a heck of a job,' Bob said," referring to Alabama governor Bob Riley. "I knew Mike was under pressure and I wanted to boost his morale," Bush writes, so he repeated Riley's words a few minutes later when he spoke to the press.

The former FEMA head, who resigned two weeks after the compliment, told CNN in August that he winced when Bush uttered the line.

"I knew the minute he said that, the media and everybody else would see a disconnect between what he was saying and what I was witnessing on the ground," Brown said. "That's the president's style. His attitude and demeanor is always one of being a cheerleader and trying to encourage people to keep moving. It was just the wrong time and the wrong place."

Bush in recent years has talked about his past problems with alcohol abuse and his 1986 decision to give up drinking completely.

Just days before the 2000 presidential election, news broke that Bush had been arrested for driving under the influence in Maine in 1976. In his memoir, Bush writes, "Not disclosing the DUI on my terms may have been the single costliest political mistake I ever made."

He says he had decided against doing so because he didn't want to undermine his admonitions to his daughters about drinking and driving.

After the news came out -- so close to election day, Bush writes, he went to bed that night on the campaign trail thinking, "I may have just cost myself the presidency."