Henry in the House: Does Obama get it? 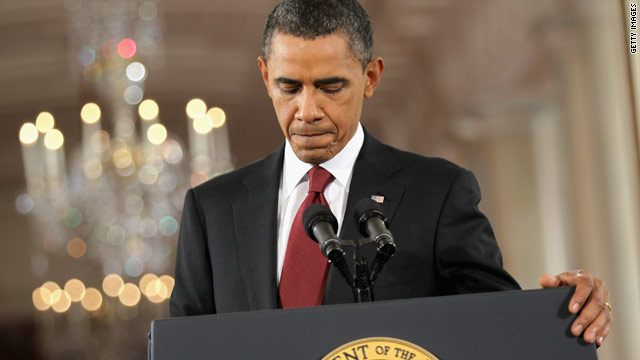 Editor's note: Ed Henry has covered the White House for CNN since March 2006. In "Henry in the House," he offers an insider's view of the Obama White House.

Washington (CNN) -- As I walked into the East Room for President Obama's post-shellacking news conference, a colleague from another organization joked, "Get ready for 17 versions of the same question."

I laughed because his point was true, many of us in the White House press corps were about to ask Obama several versions of the same question: After losing more than 60 seats in the House and several in the Senate, did you really hear the message from voters?

In short, do you get it?

Before the press conference, there had been an expectation, even among some of Obama's Democratic allies on Capitol Hill I spoke to, that he would steal a page from former President Bill Clinton's 1994 playbook and try to show he hears the anger out there and is ready to make a midcourse correction.

Instead, as I sat there in the front row of the East Room, I could see that Obama just didn't want to go there.

Now, to be clear, that is his right. He's entitled to follow his own compass and doesn't have to mindlessly follow the Clinton script. Pundits are ridiculous to suggest otherwise.

But the point is this president finally had the public's attention yesterday, and he may have missed a golden opportunity to show the American people he's ready to make the necessary adjustments to connect with their concerns over the next two years.

I realize there are people in the blogosphere who will predictably slam White House reporters on this point, basically charging we're all mindless because we end up asking the same question over and over. But part of our job is pressing the president about the most important issues confronting the nation.

And if he doesn't answer it the first time, I hardly think we should just give up and move on to some other subject he would rather talk about. In fact, Obama himself acknowledged early in the news conference that he understands this part of our job.

That moment came after Ben Feller of the Associated Press stood up first and asked whether the results were a "fundamental rejection of your agenda," and Obama ducked it with a general explanation of his view on slow economic progress and said, vaguely, "I've got to do a better job, just like everybody else in Washington does."

So, Savannah Guthrie of NBC News followed up, "You don't seem to be reflecting or second-guessing any of the policy decisions you've made. ... If you're not reflecting on your policy agenda, is it possible voters can conclude you're still not getting it?"

Obama defended himself by saying that Feller's query "was just the first question, so we're going to have a few more here." That told me the president believed Guthrie and Feller had legitimate inquiries and he knew he would get several questions along these lines. So I thought he was signaling he would use this opportunity to lay out where he thinks he screwed up and what he plans to do to fix it.

But Obama basically spoke like someone who makes a mistake but doesn't directly apologize, instead saying something to the effect of "I'm sorry if you were offended."

Case in point: Obama said the decisions he made to save the economy were in an "emergency situation" and policies were "coming at folks fast and furious." But rather than saying that, in retrospect, some of it should have been scaled back, he said, "We thought it was necessary, but I'm sympathetic to folks who looked at it and said this is looking like potential overreach."

So it was not an overreach, but you're forgiven if you thought it was one.

To bring it back to the Clinton comparison, presented with the same question about foul-ups, 'ol Bubba would have bitten his lip and talked about the error of his ways and put forward his plan to make sure it doesn't happen again.

Now don't get me wrong, this president should not simply bite his lip or feign some sort of emotional connection. The pundits who were going on and on about Obama not "emoting enough" during the oil spill crisis were kind of ridiculous. Obama has to be who he is. If he's not a lip-biter, people just need to get over it.

But nearly two years into his presidency, he eventually is going to have to find a way to build his own emotional connection to voters on his own terms, or many Americans are going to simply believe that he doesn't ... well ... feel their pain.

Note how indirect Obama was when he was talking about the pain of the midterm results. He couldn't quite say that he was humbled; instead he said that in general "some [election nights] are exhilarating, some are humbling."

And when he acknowledged early in the presser that people are frustrated that economic progress is coming too slowly, he said, "As president, I take responsibility for that." But he didn't quite get specific about what he was responsible for messing up.

This is why, near the end of the news conference, I asked Obama about the illustration he used over and over on the campaign trail about how Republicans were on the sidelines "sipping on a Slurpee" while he was trying to pull the economy out of the proverbial ditch.

He was using humor to make a point, his claim that Democratic policies ("D" on the gear shift) were moving the country forward while Republican policies would put the country in, yes, reverse and they can't have the keys back because "they don't know how to drive."

But now that this message seems to have been rejected in more than 60 House districts across the country, I asked, isn't it possible that many Americans feel Obama's policies are going in reverse and thus "what specific changes will you make to your approach to try to fix that and better connect with the American people?"

He responded that "we're still digging our way out of a pretty big mess" and now voters clearly want both parties to "push some more to get the car on level ground."

But, I followed up, "You just reject that idea altogether, that your policies could be going in reverse?"

Obama's announcement on Thursday that he wants to have a summit at the White House later this month with Republicans -- he laughed about a possible "Slurpee Summit" in a light moment at the news conference after my question -- may give him a second chance to show he's serious about acknowledging he doesn't have all the answers and is ready to accept some changes.

The bottom line, though, is he sent a different message on Wednesday -- that this is a president who is confident in his abilities and strongly believes that over the long haul, his policies are going to work out. Fair enough.

But to continue the car analogy, the American people seemed to be saying Tuesday they may want someone else to at least share the steering wheel. So far, however, Obama's message seems to be that he's so sure of himself that it's still his way or the highway.