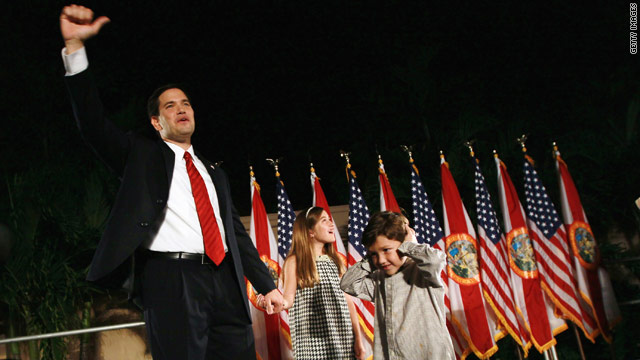 (CNN) -- Leaders of the burgeoning Tea Party movement say their projected midterm election victories should send a strong message: watch out in 2012.

"The Republicans need to know, we've done it in 2010. If they don't do the right thing in the next couple of years, it's not a problem. We'll come back in 2012. We'll do it all over again. We'll replace them with people that will uphold [our] principles," said Mark Meckler, co-founder of Tea Party Patriots -- one of the movement's largest groups.

Tuesday's elections were seen as a crucial moment for measuring the staying power of the Tea Party movement, which was born out of frustration with the political establishment and steeped in economic anxiety.

"Frankly, the Republicans blew it over a very long period of time. The largest deficit ever run up in history, before the current administration, was run up by George Bush," he said. "Our job is to reverse that course and not allow any party to ever do that again."

Video: What's next for Christine O'Donnell?

With growing momentum after months of nationwide street protests and bus tours, Tea Party activists hoped to change the makeup of Congress and the way lawmakers were elected.

At least one of their goals seemed to be likely early Wednesday, with CNN projections indicating that Republicans held 239 House seats to the Democrats' 183 -- well over the 218 seats needed for a majority.

But even though candidates endorsed by Tea Party activists made several key gains, the movement also suffered significant losses in high-profile contests.

Far-right ideology from Tea Party candidates likely cost them Senate seats in Delaware and Nevada, according to John Avlon, a CNN contributor and senior political columnist for The Daily Beast.

"That could make all the difference in control of the Senate, so there should be some self-analysis about whether or not some of these more extreme candidates who won these partisan primaries represented their Republican Party best," he said.

The grassroots nature of the Tea Party movement makes it difficult to define how many candidates on the ballot Tuesday were affiliated with it. There is no official entity that determines who is a Tea Party candidate.

Before polls opened Tuesday, CNN analyzed races across the country to identify candidates who were Tea Party activists or whose campaigns were helped significantly by the Tea Party movement.

From the list of the CNN 100 -- the top 100 House races in the country -- 21 candidates were closely connected with the movement's activists and ideology. At least 10 of them won, according to CNN projections.

In addition, various national and local Tea Party organizations endorsed more than 100 candidates in races across the country.

The rise of the conservative Tea Party movement added a new element to this year's election cycle, roiling Republican races by boosting little-known and inexperienced candidates to victory over mainstream figures in GOP primaries across the country.

But not all of them emerged victorious Tuesday.

Still, the losing Tea Party candidates appeared to be in high spirits as they addressed supporters after results came in.

Angle thanked supporters for fighting for their principles.

"I want you to see that I'm still smiling. And it's because I still believe in American exceptionalism," she said.

No matter how many of the so-called Tea Party candidates won, the impact of the movement is expected to shift the Republican agenda to the right. Paul, on the heels of his victory, has already called for creating a Senate Tea Party caucus.

Of those surveyed in CNN exit polls, 23 percent said one reason for their vote Tuesday was to send a message in favor of the Tea Party, 18 percent said they cast their ballots against the Tea Party and 56 percent of respondents said the Tea Party was not a factor in their decision.

But South Carolina Sen. Jim DeMint said the success of the Tea Party is rooted in the fact that its members can't be easily counted.

"One mistake we're making in this election is to suggest that it's all about the official Tea Party movement," he told CNN Tuesday. "For everyone who goes out to a rally, there are often hundreds, even thousands of people who feel the same way, who don't consider themselves a part of the Tea Party movement. I think there is an awakening going on in our country. There's a beginning of a process. It's not finalized tonight."

CNN's John Helton and Robert Yoon contributed to this report.