Who are the key new Republican leaders? 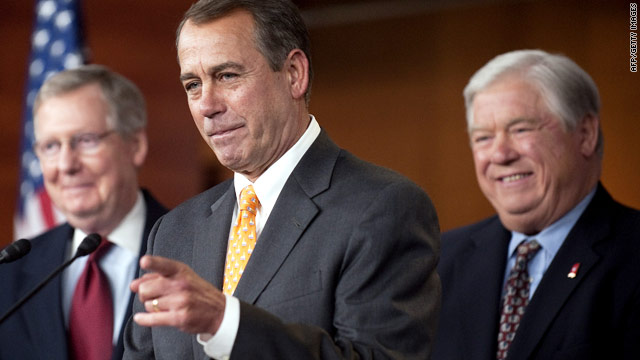 (CNN) -- With Republicans back in control of the House of Representatives, a new power structure will emerge over the next few weeks.

Republicans needed 39 seats to gain the majority, and are projected to gain 60 seats, the biggest shift in more than a half-century.

Boehner is known as a fiscal conservative who made spending reforms a key point of his campaign for House leadership. With may voters angered by what they see as out of control Washington spending, Boehner has reminded reporters that he's never requested any earmarks for his Ohio district. He has also been a powerful fundraiser for his party, which has solidified his position.

As the magnitude of the Republican takeover was becoming clear, an emotional Boehner told supporters, "Across the country right now, we are witnessing a repudiation of Washington ... a repudiation of Big Government ... and a repudiation of politicians who refuse to listen to the people."

"He is the real deal," said Republican strategist Mary Matalin. "He will run that place not seen since the likes of [former Speaker of the House] Tip O'Neill."

Boehner, who will likely be voted speaker by his party when Congress returns on November 15, twice during his speech said that despite a landslide Republican victory in the House, it was not a time for a victory lap.

"Listen, I'll be brief, because we have real work to do -- and this is not a time for celebration ... not when one in 10 of our fellow citizens are out of work ... not when we have buried our children under a mountain of debt ... not when our Congress is held in such low esteem,'' Boehner said.

And while, as his aides said, it was too early to pop the cork on any champagne bottles, Boehner is already using the Republican victory as leverage against the White House.

"We hope President Obama will now respect the will of the people, change course, and commit to making the changes they are demanding,'' Boehner said. "To the extent he is willing to do this, we are ready to work with him."

The 10-term congressman also made Skype calls, including one to a group of Tea Party activists from his home district. "I'll never let you down,'' he told the crowd to a standing ovation before signing off.

Virginia's Eric Cantor is expected to become the next majority leader, the second-ranking position in House leadership, replacing Democrat Steny Hoyer. Cantor echoed Boehner in his victory speech to a hometown crowd in Richmond, Virginia.

"The future is in our hands, so let's roll up our sleeves, let's get to work, and the result must be to return America to the land of opportunity, responsibility and success," he said.

Cantor is currently the Republican whip and the current deputy whip, California Republican Kevin McCarthy, said he will run for the post. McCarthy served as the head of recruiting for the House GOP for the midterm elections and led the effort to craft the GOP agenda project, called the "Pledge to America."

Indiana Republican Mike Pence, who has made some high-profile appearances in Iowa and is considering a bid for higher office, potentially president or Indiana governor, is considering stepping down from his current position as the No. 3 Republican to focus on his future. Texas Republican Jeb Hensarling, a conservative who has bucked his leadership in the past as a former chairman of the conservative Republican Study Committee, is expected to run for the post.

In effort to have diversity at the leadership table, Washington Rep. Cathy McMorris Rogers, the vice chair of the Republican conference, will likely retain a similar post as the highest-ranking woman in the leadership.

Because the freshman class will be large and includes a lot of conservative and Tea Party candidates, House GOP leaders are discussing including a seat at the leadership table for a representative from that group. But, it is unclear what position would be or who would get it, although one thought if it could go to the president of the freshman class.

California Republican Darrell Issa, an outspoken critic of Obama, is expected to get the chair of the Oversight Committee. He said in a statement after the vote, "The American people have sent a clear and direct message to Washington that they want less spending, limited government and more accountability.

"The mandate is clear: Advance an agenda that will create real jobs, not government jobs, but real jobs to get our economy moving again."

Issa has already said he plans to investigate the Obama administration's handling of the Wall Street bailout, the BP oil disaster and health-care reform.

Other expected committee changes include:

Appropriations: Could be a fight between Jerry Lewis of California, the current ranking member, and Hal Rogers of Kentucky, the top Republican on the Homeland Security subcommittee. But both men have long histories of requesting earmarks, something Boehner is seeking to ban. The vote on this chairmanship could become a fight by those who want to show that GOP leaders are serious about cutting spending.

Energy and Commerce: Since Texas Republican Joe Barton isn't expected to get a waiver of a three-term limit, the panel is likely to be a battle between Fred Upton of Michigan and Cliff Stearns of Florida.

Budget: The chair should go to Paul Ryan of Wisconsin, who is popular and well-respected by GOP members, but Boehner has distanced himself from Ryan's controversial proposal on entitlement reform.

Ways and Means: The current ranking Republican, Dave Camp of Michigan, is expected to take the chair of the tax-writing committee.

Judiciary: The current ranking Republican is Lamar Smith of Texas.