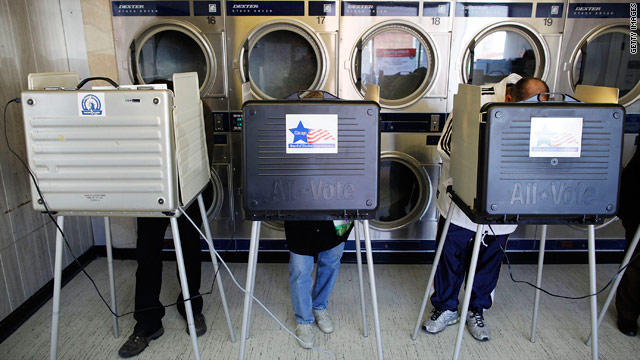 Hart's Coin Laundry doubled as a polling place Tuesday in Chicago, Illinois, where voters are electing a governor and senator.
STORY HIGHLIGHTS

Watch CNN live on TV and online tonight starting at 7 ET to get all the news and results from the hotly contested 2010 midterm elections. And share your election experiences with CNN iReport.

(CNN) -- Republicans and Democrats traded complaints of foul play in a handful of states in Tuesday's midterm elections, while sporadic computer glitches or electrical problems caused minor delays in others.

In one of the most closely watched Senate races, Republicans accused casino operator Harrah's of pressuring its employees to vote for Senate Majority Leader Harry Reid, the Nevada Democrat trying to fend off GOP challenger Sharron Angle. In a letter to federal prosecutors, Angle's campaign said the gaming giant and Reid's campaign violated federal law by mounting "nothing less than a concerted scheme to violate the rights of Harrah's employees."

The complaint cites e-mails published online by the conservative magazine National Review, which reported that they were from Harrah's managers. The authenticity of the documents, which appear to detail efforts to boost early voting, could not be independently verified Tuesday evening.

"The documents attached demonstrate that employees' votes were being tracked and supervisors were instructed by top management to personally confront employees to find out why they had not voted," a lawyer for the Angle campaign wrote. "Further, the evidence shows that Harrah's management has continually communicated to employees their concern with electing Harry Reid, and employees voted for the candidates of their choice."

There was no immediate response to the accusation from Harrah's. But Reid's campaign dismissed the complaint, saying it "has no credibility on its face."

"That being said, given Sen. Reid's work to strengthen the state's top industry, it should come as no surprise that casino employees support his re-election," the campaign said in a written statement.

The federal government dispatched more than 400 observers and monitors to 30 potential trouble spots in 18 states due to concerns about voter intimidation or fraud, but election officials said Tuesday evening that they had not yet received any significant reports of problems. A spokesman for the Justice Department's Criminal Division said that no issues had been brought to the attention of the vote fraud team as polling stations approached closing time in the eastern United States.

In Kansas, state prosecutors were looking into allegations of voter intimidation after a complaint from the state Democratic Party, said Gavin Young, a spokesman for the attorney general's office in Topeka. A number of people in counties across the state have reported getting calls that provided misleading information on how to cast their votes, Young said.

Kenny Johnston, executive director of the state Democratic Party, said the calls had been reported since last weekend. One recipient was told that voters needed to bring ID and proof of home ownership to the polls with them -- on Wednesday.

Johnston's Republican counterpart, Ashley McMillan, said the GOP was "absolutely not" behind the calls and said Democrats have been unable to identify the callers.

"It's a claim by a desperate party that's run out of stories and, frankly, run out of time," McMillan said, adding, "No proof has been provided to us that these calls have happened."

Jon Greenbaum, legal director of the Lawyers' Committee for Civil Rights Under Law, said that about 10,000 calls had been received nationwide by Tuesday afternoon to the Election Protection Hotline, a coalition of voting rights groups, although not all of the calls related to voter intimidation.

In Minnesota, where a close race was expected for governor, prosecutors in the northern city of Brainerd were looking into a report that staffers at a home for the mentally handicapped were filling out absentee ballots for patients last week. A voter filed the complaint with the support of the Minnesota Freedom Council, which said the aides were members of the American Federation of State, County and Municipal Employees -- a public employee union that has endorsed Democratic gubernatorial hopeful Mark Dayton.

"These individuals had no idea where they even were, let alone that they were voting," voter Montgomery Jensen wrote in an affidavit to election officials. "They were taken advantage of because of their disabilities, which is unacceptable."

Crow Wing County Attorney Don Ryan declined comment on what he called a "very sensitive investigation" and would not say whether any other witnesses corroborated the report. But union spokeswoman Jennifer Munt said caretakers routinely assist disabled voters and said there was "absolutely no proof" that the unionized workers were steering their patients' choices.

"For decades, we have assisted those folks in exercising the right to vote," Munt said. "We assist. We do not persuade them on how they should vote."

In North Carolina, Republicans had complained during early voting that electronic voting machines were incorrectly recording GOP picks as votes for Democrats. On Tuesday, Republican lawyer Thomas Farr said that the party received numerous complaints about the same issue. State election officials have urged voters to review their ballots and change any choices they don't want to make before casting them.

Andrew Whalen, executive director of the North Carolina Democratic Party, said Democrats have not received similar complaints about voting irregularities. He said that out of about 1 million early voters, Republicans had only a few complaints.

And in Pennsylvania, where a closely watched Senate race pitted Democrat Joe Sestak against Republican Pat Toomey, disputes flared up among poll workers in several Philadelphia precincts over who would serve as a minority-party inspector for the day, according to the Committee of Seventy, a nonpartisan election watchdog group. Assistant District Attorney Yvonne Ruiz, whose office fielded those calls, said they had been checked out and resolved "for the most part."

The Committee of Seventy said there were several reports of malfunctioning machines and late poll openings, including one West Philadelphia precinct where poll workers had to use a sledgehammer to open the building after a key broke off in the lock.

"Seventy is not recommending this approach," it noted.

Robocalls urging voters not to vote -- or to vote on the wrong day -- were the topic of complaints in several states, including California, where the secretary of state received reports of a Spanish-language call that urged people to vote on November 3 -- the day after the election. Shannan Velayas, spokeswoman for Secretary of State Debra Bowen, said investigators had not yet heard the call and were looking for a recording.

Kansas election officials were looking into reports of a similar call that told people they needed voter registration and proof of home ownership in order to vote on November 3, according to Tyler Longpine, spokesman for the secretary of state's office.

And in Maryland, election officials received a single report of a robo-call claiming that Gov. Martin O'Malley had secured his re-election. The call urged listeners to stay at home and watch the results, according to Jared Demarinis, the director of Candidacy and Campaign Finance in Maryland.