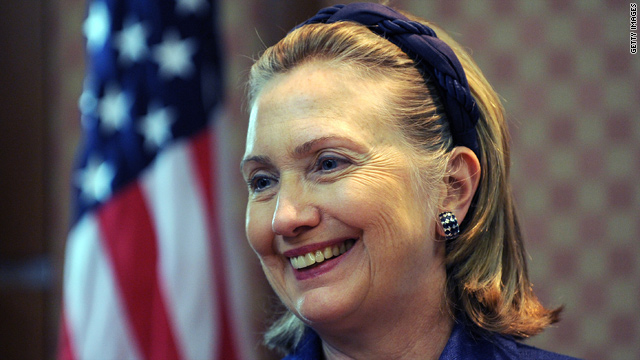 Washington (CNN) -- Election Day is here. The rhetoric has been intense, interesting and, shall we say, passionate. Here are some things you might have missed.

Where in the world is ... Hillary Clinton?

Secretary of State Hillary Clinton, arguably one of the best campaigners out there, is noticeably absent from the 2010 midterm campaign trail, the British newspaper Daily Telegraph reports. So where is she? Asia.

The Hill released its guide to which election night parties in Washington you should check out.

According to the Fort Collins Coloradoan, the Rock the Vote group took out a full page ad in Colorado State University's student newspaper -- the Rocky Mountain Collegian -- urging its readers to vote on November 2. The only problem? The paper printed "November 4" instead. It has since issued a correction.

A new poll by AOL News finds that 60 percent of Democrats and Republicans are "more afraid of each other than they are of snakes, dentists, clowns or the number 13."

Picture of the day

Who knew that the "Easter Bunny" was a Rand Paul supporter? Check out the Getty Images photo here.

Radio host/TV personality/man of many talents Ryan Seacrest will air an interview with President Obama this Election Day. While voting will be the No. 1 question, don't be shocked if Obama is asked to weigh in on the latest Kardashian girls' drama.

He said, he said

Actor Morgan Freeman is denying that he ever recorded a campaign ad for North Carolina Republican House candidate B.J. Lawson. His spokesman said Freeman was the voice behind the ad.

Freeman, in a statement, said point blank: "These people are lying. I have never recorded any campaign ads for B.J. Lawson and I do not support his candidacy."

Quote of the day

"Over all, if it is won, a Republican House majority will be like a second marriage. Less ecstasy, more realism. The party could have used a few more years to develop plans about the big things, like tax and entitlement reform. But if a party is going to do well in an election, it should at least be a party that has developed a sense of modesty." -- New York Times columnist David Brooks.

"How many think Democrats will keep the House? [cheers]. How many are too busy trying to keep their own house? -- Comedian Jay Leno on Monday's "Tonight Show"

"A new poll says that among likely voters it [Prop 19 to legalize marijuana in California] is now trailing by seven points. The key words are 'likely voters.' With all the leftover Halloween candy to eat, this is a bad week to try to get stoners to leave the house" -- Jimmy Kimmell on Monday night's show.