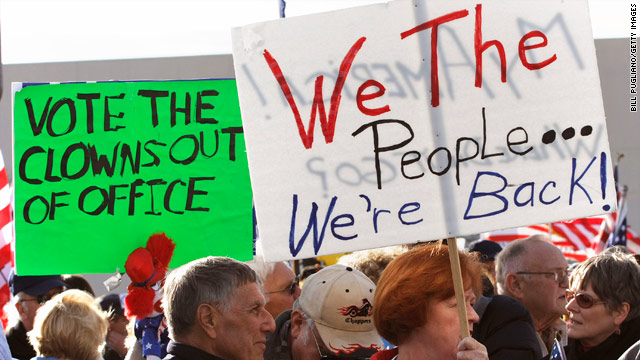 Just one in four Americans say things are going well in the country today, according to a CNN poll.
STORY HIGHLIGHTS

Washington (CNN) -- The number of Americans who say things are going badly in the country, at 75 percent, is higher than it has been on the eve of any midterm election since the question was first asked in the mid-1970s, according to a new national poll.

A CNN/Opinion Research Corporation survey released Monday also indicates that the economy remains, by far, the top issue on the minds of Americans. Fifty-two percent of people questioned say the economy's the most important issue facing the country.

"That's more than the deficit, education, health care, terrorism, energy, illegal immigration and the wars in Afghanistan and Iraq combined," says CNN Polling Director Keating Holland. "No other issue was named as the country's top problem by more than 8 percent."

The economy has been the issue most on the mind of Americans in CNN polling since the end of 2007.

Video: Obama: We will win

Video: App shows you where to vote
RELATED TOPICS

The top concern remains unemployment, with 58 percent saying it's the most important economic issue facing the country today, followed by the deficit at 20 percent, and taxes and mortgages tied at 8 percent each.

Get the most comprehensive polling data available at CNN's Polling Center

"Even in 1994, when the Republicans last took control, and in 2006, when control flipped back to the Democrats, roughly half the public was satisfied with the state of the nation," adds Holland. "Only 25 percent say that things are going well in the country today, and voters appear poised to take it out on the Democrats on Tuesday."

The CNN/Opinion Research Corporation poll was conducted October 27-30, with 1,006 adult Americans -- including 921 registered voters and 542 likely voters -- questioned by telephone. The survey's overall sampling error is plus or minus three percentage points.