After a long and nasty campaign, voters finally decide on Tuesday 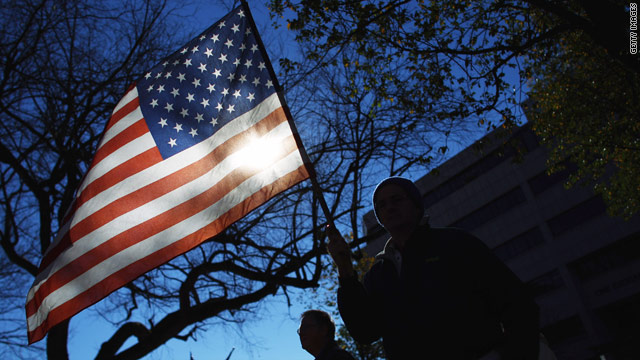 Washington (CNN) -- No more robocalls interrupting dinner or angry campaign ads at every TV break -- the most expensive mid-term elections in history finally take place Tuesday, when voters decide who goes to Congress and governors' offices.

Polls indicate a dissatisfied electorate may clean house -- literally -- by tossing out the Democratic majority in the House of Representatives and possibly doing the same in the Senate.

With all predictions, including those of Democrats, signaling Republican gains, the election is considered a referendum on both the Democratic-controlled Congress and President Barack Obama's first two years in office.

Losses by the governing party are common in the first mid-term election it faces, but the shift Tuesday could rival or match historic levels dating back decades.

Unemployment of 9.6 percent amid a slow recovery from economic recession has been the dominant issue, with Republicans accusing Obama and Democrats of pushing through expensive policies that have expanded government without solving the problem.

Obama has led Democrats in defending his record, saying steps such as the economic stimulus bill and auto industry bailout were necessary to prevent a depression, while health care reform and Wall Street reform will lay the foundation for sustainable future growth.

As voting day approached, voter anger appeared to tune out the Democratic arguments. Conservative groups and the U.S. Chamber of Commerce funded attack ads that skewered increased spending under Obama and the health care reform bill he championed, while labor unions and traditional Democratic donors backed messaging that warned a GOP victory would bring back Republican deregulation and policies that caused the recession.

The long and bitter campaign season will cost more than $3.5 billion to be the most expensive non-presidential vote ever, according to the nonpartisan Center for Responsive Politics, a watchdog group.

Republicans need to win an additional 39 seats to claim the House majority, and 10 more Senate seats to overtake Democrats there.

With around 100 of the 435 House seats at stake considered "in play," or competitive, the anti-Democratic mood is predicted to result in big Republican gains.

On the Senate side, where 37 of the 100 seats are being contested, the majority will be decided by key races in Nevada, Washington and a few other states where Democratic incumbents face strong challenges.

A new national poll released Monday showed the number of Americans who say things are going badly in the country, at 75 percent, is higher than it has been on the eve of any mid-term election since the question was first asked in the mid-1970s.

The CNN/Opinion Research Corp. survey also indicates that the economy remains, by far, the top issue on the minds of Americans, more than all other major issues combined, including terrorism, health care, illegal immigrants and the wars in Afghanistan and Iraq.

In addition, the rise of the conservative Tea Party movement has added a new element to the election cycle, roiling Republican races by boosting little-known and inexperienced candidates to victory over mainstream figures in primaries across the country.

Tuesday's vote will show how many of the so-called Tea Party candidates can win in a general election, but no matter the final tally, the result is expected to shift the Republican agenda to the right.

Ron Bonjean, a Republican strategist who worked for the last Republican House speaker, Dennis Hastert, put it bluntly: "It's been a hostile atmosphere, but it will be hostile on nitroglycerin."

Ohio Republican Rep. John Boehner will be the new House speaker if the GOP wins control of the chamber. He already has signaled little appetite to negotiate with the White House or congressional Democrats, saying last week that "this is not a time for compromise."

Boehner and other conservatives say the top priorities must be spending cuts to try to balance the budget and job creation to spur the economy. However, they also advocate extending Bush-era tax cuts for everyone at a cost of $4 trillion over the next decade.

In the Senate, legislative gridlock is likely if Republicans strengthen their current minority of 41 seats. Obama and Democrats accuse Senate Republicans of using obstruction tactics as a political tool, showing the distrust and animosity that already exists.

Voters on Tuesday also will decide governors' races in 37 of the 50 states, with the outcome potentially having an influence on redistricting based on the results of the 2010 census.

In most cases, state legislatures draw the lines and governors have the power to approve or veto that map. Governors also can influence whether any loss or gain of seats in their state involves districts represented by Republicans or Democrats.

The list of states that will gain or lose seats is released in December. However, Election Data Services issued estimates based on preliminary census figures that indicated Texas will gain four seats, Florida will gain two, and Arizona, Georgia, Nevada, South Carolina, Utah and Washington will each gain one, while Ohio and New York will lose two seats, and Illinois, Iowa, Louisiana, Massachusetts, Michigan, Missouri, New Jersey and Pennsylvania will each lose one.