Stewart and Colbert fans in D.C.: Serve us up sanity, not Tea 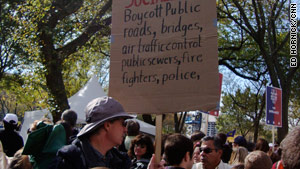 Ethan Williamson said he came to the rally Saturday in Washington to speak out against extremism in politics.

Washington (CNN) -- Ethan Williamson traveled from Wilmington, North Carolina, to the nation's capital Saturday with a clear message in mind: To support sanity in politics.

Williamson, 45, was just one of the thousands who ventured to the National Mall in Washington to see the "Rally to Restore Sanity and/or Fear" -- the brainchild of Comedy Central hosts Jon Stewart and Stephen Colbert.

The crowds spilled throughout the streets near the capital building and onto the grassy Mall. Many found it difficult to hear what was coming from on stage, though word-of-mouth clued them in. People were especially thrilled when Cat Stevens, who now goes by Yusuf Islam, and Ozzy Osbourne treated the audience to a couple of songs.

"It [the rally] almost feels like the only answer to the ridiculous extremes that we're seeing -- to laugh about it," he said. "It's the only way to release the inherent conflict and tension that is created by that."

Stewart and Colbert's skewering of the media, Democrats and Republicans has been lauded as a great way to appeal to a large segment of the population, especially young voters, frustrated by politicians and the murky political process that takes place in Congress.

Alex, who didn't want his last name used, displayed his sign, which showed the iconic American eagle with an American flag heart with the words "The heart of America is the Center" over the picture.

"I think it's important that we have some sensibility in our politics these days," he said. "There's a lot of emotions running high. People are using a lot more of their emotions than their sensibilities."

Were you there? Send your photos, videos to iReport

The 32-year-old, who lives blocks away from the event, said the crowd and the atmosphere is similar to what he found when he attended Barack Obama's presidential inauguration.

"This is one of the biggest things I've seen here. Anytime you can't move on to a part of the Mall, you know that's it's really massive."

After watching the show, Alex said that he only had one complaint. He would have preferred that Colbert's fear rally and Stewart's sanity rally would have marched toward each other, face off and then shake hands in a symbolic gesture.

The moment that stuck out for him?

"Definitely when Stephen Colbert's underneath the stage in the fear box and then when he came up in the Evel Knievel suit. That was classic. That was outstanding."

Beth Peter traveled from Las Vegas, Nevada, to rally for sanity -- though she had another reason. She said she was also showing her opposition to Nevada Republican senatorial candidate and Tea Party favorite Sharron Angle.

"She scares the bejesus out of me," Peter said. "I am a Harry Reid voter -- he is the lesser of two evils, which is kind of bad that our elections have turned out to be who's not the worst. It's depressing."

Peter, 29, said attending the rally was about having the chance to go and be politically active without having to stand on a soap box and scream.

Like Peter, one Dallas, Texas, native said the rally was a great way to show there's resistance to the growing influence of the Tea Party movement, which is often taken to task by Stewart and Colbert.

"I'm glad people are coming out here and doing this and showing there is resistance towards the Tea Party -- especially during this essential time," said Megha, 19, who is a student at Georgetown University.

"It's a pressing problem right now. If we keep this fear alive, the Tea Party will start gaining some serious seats and that's frightening."