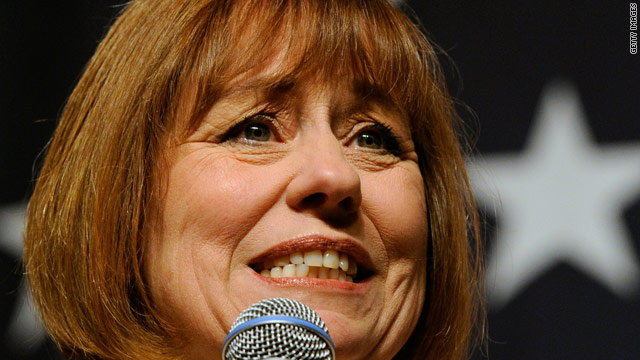 U.S. Senate hopeful Sharron Angle told voters at a Nevada rally, "there is going to be shock and awe in Washington."
STORY HIGHLIGHTS

Las Vegas, Nevada (CNN) -- Nevada Republican Senate nominee Sharron Angle on Friday night declared "there is going to be shock and awe in Washington" after the election.

During a rare appearance open to the media, Angle also mocked one of President Obama's phrases, promising "we're going to have a teachable moment."

The woman who could unseat the Senate's top Democrat vowed that conservatives will demand that Congress use its lame duck session to repeal health care reform, which she called "Obamacare," and permanently extend the Bush tax cuts.

"The future of the nation rides on us, Nevada," she told a crowd of roughly 500 supporters. "This is an election of contrasts. We have a choice this election."

Angle described herself as a "middle class mother and grandmother" in contrast to "Harry Reid, who has been a politician for over 30 years." She continued, "I live in a middle class neighborhood in Reno, Nevada. Harry Reid lives in the Ritz Carlton in Washington, D.C."

In Nevada, Reid has a modest home in the tiny town of Searchlight.

After noting the state has the highest unemployment and foreclosure rates nationwide, she repeated her debate night one-liner: "It is time to tell Harry Reid -- time to man up and fix this economy."

She used the line to make a dig about Social Security, saying Reid should "man up and admit there is a problem" with the program's solvency.

The candidates have tussled for weeks over Social Security. Reid has consistently argued that the program is financially stable and accuses his opponent of demagoguing the issue to frighten seniors.

The candidate introduced McCain as someone who did "man up."

McCain told the audience that come Election Day, "we are going to kick Harry Reid out of his penthouse at the Ritz Carlton and send him back to Searchlight."

It was an ironic moment because McCain was criticized for owning multiple properties, some of them luxurious, during his 2008 presidential bid.

"This election will change America," he said. "The world is watching this election. My friends, the 51st vote to give Republicans majority in the U.S. Senate will come right here from the state of Nevada. I look forward to standing side by side with Angle."

Many in the audience jumped to their feet, applauding.

McCain took a jab at Obama over a remark he made on the campaign trail, describing Americans as "scared" over the state of the economy.

Earlier in the program, Michael Reagan, son of former President Ronald Reagan, told the audience that defeating Reid was his father's last political wish. He also declared that his father "was the original Tea Party."

Perhaps the most impassioned speaker of the night was Voight.

The actor attacked Obama for launching a "destructive assault" on the nation.

Lacing his remarks with accusations of "lies' and "fraud" perpetrated by the White House, he elicited a rousing ovation when he announced, "Obama is not a Democrat. He is a radical socialist more sympathetic with our enemies than our allies."

Strategists with both the Reid and Angle campaigns acknowledge the race is tight and turnout is the key, with early voting an important factor.

When asked for a show of hands, a majority in the audience indicated they had voted. Early voting ended Friday.

Reid appeared Friday evening at his own get-out-the-vote event with boxer Manny Pacquiao.

The campaigns, state parties and outside groups will be working hard to spur voter turnout throughout the next 72 hours. Both candidates will be in the northern part of the state at various stops, and are expected to make an appearance Saturday during a parade in Carson City.