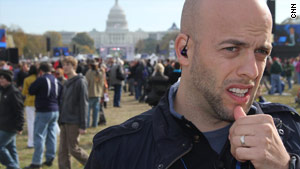 (CNN) -- OK, there's no way to write this article without name dropping. To cut to the chase, I know Jon Stewart and Stephen Colbert, and you don't.

I used to work for "The Daily Show" and "The Colbert Report" as the audience warm-up act. Not a bad day job.

But knowing the hosts didn't mean I got to parade on stage at Saturday's "Rally to Restore Sanity and/or Fear."

I was in the audience with the thousands of fans, reporting on the events for CNN. But the audience was where the real spectacle unfolded this weekend.

In a lot of ways, the people congregating on the National Mall looked just like the people I used to perform for back at "The Daily Show" and "The Colbert Report."

Black, white, Hispanic, old, young -- every race, every ethnicity and every age group was represented in the sea of fans. The unifying characteristic, however, was that they were overwhelmingly thoughtful and hilarious Americans.

They appreciate good comedy and political satire. And they know how to create it themselves. That was made was obvious in the signs they carried.

"God Hates Nags," "Hitler was a total Nazi" and the mundane but humorous "this is not a protest sign."

And like all good comedy shows, everyone sported a smile. Humor brought everyone together.

In the days to come, there will be some commentators questioning whether Stewart and Colbert crossed the line from comedians to political commentators.

In all honesty, I'd say, yeah, I think they did make a political stance at the rally. The fact is comedy is an art form. And comedians are artists.

People at rally: No Tea please

You can't be passionate about something and not have some part of yourself and your beliefs shine through.

The message Stewart and Colbert were peddling came through loud and clear. As Jon said: "We live now in hard times. Not 'end times.' "

Whatever your politics, I think everyone can agree that taking a step back and approaching our nation's problems rationally and sanely is the only way solve them. And we have to do it together.

As difficult as that might sound, we have to learn more about the issues we all care so passionately about.

And then we have to have a civil conversation. Without fear, and without insanity.