Preston on Politics: Steele finds future on the road 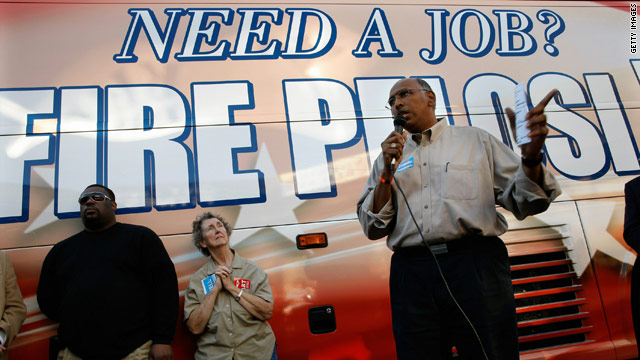 "On the bus, baby," Steele said as his motor coach for the "Fire Pelosi Bus Tour" pulled away from Capitol Hill. "Leaving Washington."

He kidded that his staff was "trying to get rid of me" and seemed genuinely happy to be leaving behind the nation's capital -- a town full of political professionals who are not necessarily Steele fans. "This isn't where the action is ... and this party needs to be where the action is."

Fast-forward to the present, as the tour comes to an end, Steele is rolling back into Washington armed with new perspective about the immediate future. Not necessarily the future of the Republican Party -- it is all but expected that the GOP is going to win big on election night. The question is how many seats? Will Republicans take back the House of Representatives? Maybe the Senate?

For Steele, a great Republican night would be the fuel the controversial chairman needs to run a strong campaign for a second term, if he already hadn't decided to do so.

Steele signaled to a small group of Republican National Committee members last week in a conference call that a second term is very much on his mind and even named two staffers who would run his campaign. It caught several participants by surprise, but Steele assured them that the reception he has received on this nationwide bus tour has been tremendous.

Steele has come under fire for this six-week campaign tour, with critics charging that he is spending precious money and time visiting congressional districts that were not competitive. Instead, these critics accuse Steele of using it as a way to visit with RNC officials all across the country who will vote in January for the next chairman of the committee.

Steele has defended the tour, and as his motor coach began the first leg on September 15, I spent a half-hour with him talking about his tenure as chairman, the criticism, his future political plans and his relationship with President Obama. The tour began the day after the Delaware primary, and he pledged to help Christine O'Donnell in her race for the open Senate seat. It seemed fitting that one of his final stops was in that state.

Six weeks ago, Steele was coy about whether he would seek another term, saying, "I don't want that to be the focus, nor should it be the focus of what we're doing. That's irrelevant now."

But the chairman did say he was "looking at every ... all my options," adding that "this has never been about me, my ego and all that." Instead, Steele said that it has been about "looking at how we can lead going forward, and I firmly believe you know that this moment has been afforded to me by the members."

Steele, who once trained as a monk, invoked God, saying, "He has been blessed ... with the opportunity to allow me to do this and to put it in people's hands on November 3.

"The people will have a choice of who the next chairman will be, not the pundits and the bloggers, who are going to be calling for my head and or calling for support of me," Steele said. "But the members who've been charged to define the leadership of this party; they'll decide whether or not I have raised the money and won the elections to their satisfaction."

It is the money or lack thereof that has been the biggest criticism of Steele, who has also caught flak for his stewardship of the committee and at times comments that have caused fellow Republicans to grit their teeth.

Steele and top RNC aides dispute the idea that he has not been as successful in raising money and compare his fundraising activity to previous election cycles when the GOP was not in power to emphasize their point. Still, it has sparked special-interest groups, which are advised by the likes of longtime GOP operatives Ed Gillespie and Karl Rove, to spring up and open their own political operations aimed at defeating Democrats and electing Republicans.

Steele said that criticism about his poor fundraising is unfounded, but he added it was "a disappointment because the very people that are spreading that know it's a lie."

"All I ever wanted, from the first day I took this job, is a fair shot to do it," Steele said. "Don't criticize me for not raising money when you have told people not to give to us."

And the chairman claimed there has been a misperception that donors fled the RNC when he took the reins, arguing some people already had stopped giving.

"My donors aren't leaving," Steele said. "Do you know the first phone call I'd made to was to a major donor? You know what he told me? I am not giving to the RNC, and I haven't given since 2008 because I don't like the direction the party's going."

In the 22 months that Steele has been chairman, Republicans have scored some big victories such as winning the special election to fill the late Sen. Edward Kennedy's seat in Massachusetts, and taking back the governorships of New Jersey and Virginia. And Steele points out that the RNC was very much involved in those races.

But there are the controversies: comments about Rush Limbaugh, remarks about Afghanistan and the embarrassing revelation that the RNC picked up the tab at a risqué Hollywood nightclub. To be fair, Steele was not at the nightclub nor did he know about the evening, but it added to the perception or some would say reality that he is a poor chairman.

Despite the criticism, Steele said he is "not looking for a pity party."

Asked to explain what he meant by saying he was not conventional and noting that he was a black Republican in the same sentence, Steele said it wasn't about race, but rather about him.

"It's not because I'm an African-American," Steele said. "I'm saying it because that's my makeup. I'm not a conventional guy. Whether I'm black, white, Indian, it doesn't matter. My makeup, the way I see problem-solving is not to do it the same old, same old. I do not accept the status quo. I never have. Just ask my mom. I never have. So it has nothing to do with my skin color but everything to do with how I come to my politics."

Steele has all the skills of a successful politician: He's personable, smart and energetic. Yet he has had a hard time being accepted by many in the political establishment who complain he is a poor manager and more interested in promoting himself than tending to the day-to-day duties of running the committee.

Steele contends that professional political operatives were frustrated when he became chairman because he told them that the power was shifting back to the states, including the awarding of contracts.

"What made me a target was the fact that I came into the building and I did what I said I was going to do. I was pushing the emphasis away from the RNC, the Republican National Committee as an institution, a building on First Street, and putting it back into the states," he said.

As the motor coach approached Fairfax, Virginia, for the first event six weeks ago, Steele noted that the GOP has come a long way from January 2009 when it was a party in disarray. "Think back to where we were and what effort it has taken to get to this point where the people are going to give us their support and their vote," he said.

"We will take whatever blessing the people bestow. And from that moment we will go into the next Congress, and we will lead and I will be leading in some capacity. I don't know what that is."

Steele is correct when he says that it won't necessarily be the bloggers or the pundits who decide his fate. The chattering class will certainly help shape and perhaps influence his political future, but ultimately it is the state GOP chairmen and national committeemen who choose the RNC chairman.

Steele said six weeks ago that he "will be leading in some capacity" but was quick to note that "I don't know what that is."

Well, apparently he now does after spending six weeks on the road. Steele sees himself as RNC chairman heading into the 2012 presidential election.