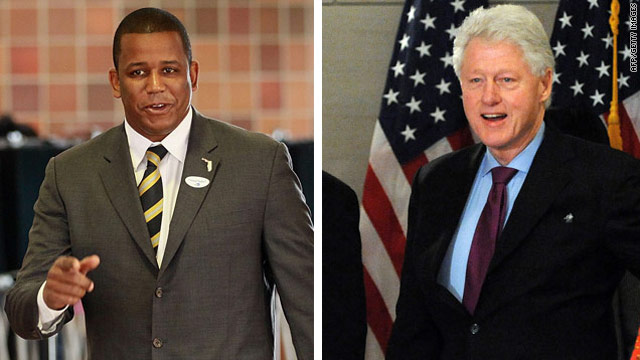 Rep. Kendrick Meek, left, is still running for the Senate in Florida, despite reports former President Clinton asked him to quit.
STORY HIGHLIGHTS

Washington (CNN) -- The point that many people seem to be missing in the Florida Senate saga is that this whole mess actually has very little to do with Rep. Kendrick Meek or the Sunshine State -- it's all about a much broader fear among senior Democrats that they may be about to lose control of the chamber.

There are some fascinating inside details I've been able to piece together about how and why this Meek story exploded into the public.

In the words of one senior Democratic Party official, the Meek story came to a head because former President Bill Clinton "flew into a purple rage" about the Democratic candidate breaking a private pledge to him to get out of the Senate race and endorse independent candidate Charlie Crist.

But a source close to Clinton said he "never saw anything close" to rage from the former president, who is at peace with how this wound up.

"He always believed this was Meek's decision,' said the source close to Clinton.

As for the Obama adminstiration's role in this, I'm told by senior Democratic officials that while White House aides were in the loop on the Clinton-Meek talks, they were not driving the conversation and were not lobbying Meek to go.

Video: Meek: I'm not dropping out

I'm also told that senior officials deliberately kept President Obama out of the loop on these behind-the-scenes conversations because they did not want to get him personally tainted by the Meek story. That came no doubt in part because they didn't want it to blow up in his face like the botched attempt to get Joe Sestak out of the Democratic primary in the Pennsylvania Senate race so many months ago. (Clinton was the intermediary then, too).

But all the jockeying and horse-trading is really just a sideshow. The real story is how bad the broader electoral map has gotten for Democrats heading into the final weekend of this midterm election: Top Democratic officials privately say they believe they are going to lose the House, but as they survey the country they are getting increasingly worried they will also lose the Senate.

These Democratic officials tell me they've reviewed private polling numbers that suggest Sen. Patty Murray of Washington has a razor-thin lead of about two points over Republican Dino Rossi despite all kinds of help from the president and first lady Michelle Obama, among others.

They're also deeply worried about whether Senate Majority Leader Harry Reid of Nevada can beat Republican Sharron Angle, so suddenly the "firewall" out West to keep control of the Senate might be more like a crumbling brick wall.

These Democratic officials also say in private that they think Sen. Russ Feingold of Wisconsin is likely to lose to Republican Ron Johnson and they're worried enough about Obama's old Senate seat that the president is heading home to Chicago, Illinois, on Saturday night for a rescue mission to again help Democratic candidate Alexi Giannoulias in his battle with Republican Mark Kirk.

Thanks to that awful landscape, Democratic officials made the brutal political calculation to try to toss Meek aside, because if Crist somehow beats Republican Marco Rubio in the three-way battle, he has indicated he will align himself with Democrats. A Crist victory would offset a potential loss in another state like Nevada or Wisconsin to help keep the Senate in the party's hands.

"It's got nothing to do with Florida," one senior Democratic Party official told me about the story that's rocked the state. "Except that if Kendrick was at 25 percent [in the polls] there may have been some sense that he was driving African-American votes that [Democratic gubernatorial candidate] Alex Sink couldn't get on her own."

Instead, Meek is stuck at 15 percent in the latest Quinnipiac University poll, a distant third place behind Rubio (42 percent) and Crist (35 percent). My sources say that given that grim political reality, several top Democrats have been privately encouraging Meek to step aside for the good of the party and Clinton was brought in as the "closer" to help seal the deal.

For several days over the last week or so, Clinton believed he had persuaded Meek to throw his support to Crist. I'm told that one of many scenarios had Crist and Meek joining up this past Tuesday at an event in Florida, but there was also another more dramatic scenario: The two candidates would shock the political world by getting together shortly after last Sunday morning's CNN debate among the three candidates moderated by Candy Crowley.

But two people close to Meek persuaded him to reconsider: his wife and Rep. Alcee Hastings of Florida, both of whom made the case that he would upset his supporters, especially African-American voters who had already turned out in early voting, and jeopardize his career long-term.

At one point, Democratic officials say Meek went into "radio silence" mode, infuriating Clinton and others as they waited to see if the congressman would follow through on his private promise to get out of the race. When Meek finally emerged to tell party officials that he was staying in, Clinton was unhappy.

Shortly thereafter, the story was leaked to Politico, causing some chaos. The leak sent the message to the Democratic base that the party hierarchy does not believe that Meek can win, so the rank and file might prefer to vote for Crist instead of throwing their vote on Meek.

Top Republicans are laughing at this strategy and the broader Democratic claim that the Florida seat is still winnable for Crist. One said, "I think a fair question for the White House is this: What does it tell your Democratic base to see that senior party officials are willing to throw an incumbent African-American Democrat congressman under the bus in place of a former Republican who campaigned against the health care bill and on a pro-life platform?"

In fact, I asked top Democratic officials if it's really worth it to try to push Meek out, even though the whole plan has now been exposed and it appears the congressman will not budge. The consensus was yes, it's worth it simply because holding on to the Senate is the Democrat's sole chance of keeping some power on Capitol Hill.

One senior official was particularly blunt in saying the goal among top Democrats now is to get Meek's numbers even lower than 15 percent in the polls, perhaps even below 10 percent, in the hopes that he goes so low that Crist gets a surge of support and pulls out a comeback victory. But is this really worth the risk of dropping one of your own Democrats down below 10 percent?

"Who cares if Charlie Crist wins and he caucuses with Democrats?" this Democratic official said bluntly, adding that this strategy is critical "especially if we don't hold on out West" in some of the other Senate battles.

In other words, time to tighten the seat belts. Tuesday might be even bumpier than expected.