'Year of the Woman' on ballot but not at polls 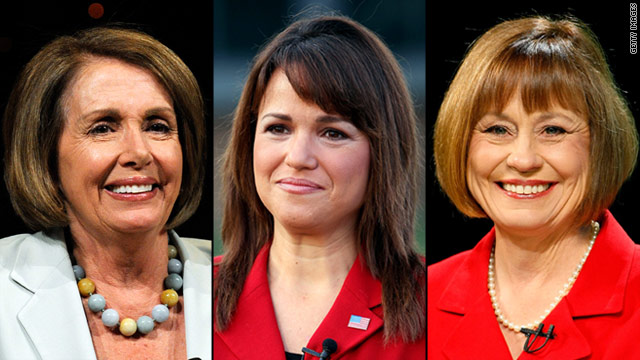 Rep. Nancy Pelosi and Senate candidates Christine O'Donnell and Sharron Angle are among the female candidates this year.
STORY HIGHLIGHTS

(CNN) -- GOP candidates Christine O'Donnell, Sharron Angle and Nikki Haley have captured the attention of the country this election season, but they're just a few of the record number of women pursuing office this year.

More than 160 women congressional and gubernatorial candidates won their primaries and will be on the ballot next week, leading some observers to dub 2010 the "Year of the Woman."

"We're ranked 90th in the world in the number of women in elected office. We trail behind Cuba and Afghanistan," she said, citing data from the Inter-Parliamentary Union on the percentage of women in national parliaments.

"[People] look at Hillary Clinton's run for Congress. She's secretary of state. They look at [House Speaker] Nancy Pelosi and say, 'Oh, we got there! We have parity,' " Bennett said. "Nothing could be further from the truth."

Bennett worries that for the first time in more than 30 years, we'll see a backslide in the percentage of women in Congress, particularly among Democrats.

Democrats are expected to lose seats in the House and Senate, and the female lawmakers in office are overwhelmingly Democratic.

There are 13 Democratic women in the Senate, compared to just four Republican women. In the House, there are 56 women who are Democrats and 17 who are Republicans.

"The deeper problem underneath all this is we do not have a pipeline or a bench of women prepared to step up and run for the inevitable number of women that we are going to lose this cycle," added Bennett, who was the Democratic nominee for Pennsylvania's 15th District in 2008.

"She Should Run," a program run by the Women's Campaign Forum, is an effort to recruit and equip women candidates. The program also encourages women to ask other women to consider making a bid for office.

iReport: Maria Shriver shares her thoughts on women in politics

In a potential blow to the current crop of female candidates, women voters aren't as pumped about heading to the polls this year, according to national surveys.

"We haven't seen this in the past, but this year it does look like women are less enthusiastic about voting than men are," said CNN polling director Keating Holland.

In a commentary for CNN.com, Susan Wefald and Sara K. Gould, both with Ms. Foundation for Women, pointed to a number of factors leading to lower levels of excitement:

WOMEN BY THE NUMBERS
Filed for Senate: 36
Won Senate primary: 14

Women feel overburdened by the state of the economy, turned off by the current state of American political affairs.

"The rhetoric of this political season may not be what we want or like, but times are simply too tough for millions of women to sit this one out," they wrote.

Jennifer Lawless, a former congressional candidate and current director of the Women & Politics Institute at American University, says it is not specifically women who are low on enthusiasm this year.

Video: Women just aren't that into it

Video: Women the new face of the GOP?

Video: O'Donnell's primary win splits GOP
It is the year of the Republican woman. I pray to God that on November 3 I'm right.
--Sue Lynch, president of National Federation of Republican Women
RELATED TOPICS

"Women are disproportionately registered as Democrats. So it's not necessarily that women are less excited and less interested -- it's that Democrats are, and that indirectly means women are," she said.

Based on her experience campaigning for the midterms, Sue Lynch, president of the National Federation of Republican Women, said she thinks interest among Republican women is higher than ever.

"The enthusiasm that I'm seeing as I travel across the United States has just been overwhelming," she said. "The enthusiasm I think is at its peak. I don't know that I've ever seen in the past 12 years at the national level such a camaraderie for our women in moving forward and running as candidates."

The female candidates, she added, are bringing a new tone to the Republican Party.

"My adrenaline is pumping," Lynch said. "It is the year of the Republican woman. I pray to God that on November 3 I'm right."

Lawless, who is less optimistic about Election Day, says she expects at best, women will hold steady at 17 seats in the Senate and lose four to six seats in the House.

"All of the pieces were in play for an anti-establishment, anti-Democratic, anti-incumbency year, and we've seen that happen," she said. "Republican women running this cycle have an opportunity to represent that which is not currently in power -- which tend to be Democratic establishment candidates."

1992 -- the previous "Year of the Woman" -- was really the year of the Democratic woman, because that was who represented the anti-establishment candidate at the time, Lawless said.

"It's shaping up to look like the year of the Republican. And it turns out that in some of the most high-profile races, the Republicans actually have women running."