Obama visits Jon Stewart and 'The Daily Show' in D.C. 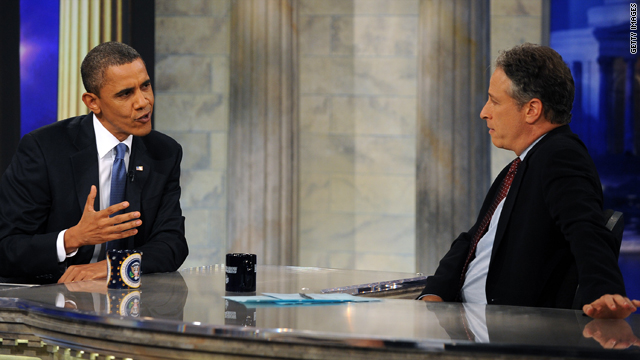 Washington (CNN) -- President Obama gently sparred with Jon Stewart on "The Daily Show" in the final run-up to next week's midterm elections, after the comedian called his legislative progress "timid."

Playing off the title of Obama's book "The Audacity of Hope," Stewart challenged the forcefulness of the president's political agenda during his first two years in office.

"Is the difficulty that you have here the distance between what you ran on and what you delivered?" Stewart said. "You ran with such, if I may, audacity ... yet legislatively it has felt timid at times."

"Jon, I love your show, but this is something where I have a profound disagreement with you ..." Obama said, leaning forward and intently tapping his finger on the desk, "this notion that health care was timid."

"This is what most people would say is as significant a piece of legislation as we have seen in this country's history," the president continued, saying the Affordable Care Act will provide health coverage for 30 million people, introduces a Patient's Bill of Rights and will cut the deficit by over a trillion dollars.

The 30-minute program taped at Washington's Harman Center for the Arts took place before a packed house, with some waiting in line for up to four hours to attend. "The Daily Show" is in Washington all week ahead of Stewart's planned "Rally to Restore Sanity" on the National Mall on Saturday.

"You ran on the idea that this system needed basic reform ... feels like some reform was done in a political manner that has papered over a system that is corrupt," Stewart said, again challenging the pace and extent of change initiated by the Obama administration.

"Over the last two years, in emergency situations, our basic attitude was we have to get things done, in some cases quicker," the president said, acknowledging the global economic crisis that was swirling at the time he took office. "[Democratic leaders] worked within the process instead of transforming the process."

During a lighter moment, Stewart presented Obama with Mug Force One -- a presidential coffee cup. The men traded quips over "The Daily Show" stage, which resembled a Grecian temple.

"This is a nice set," Obama said. "It reminds me of the convention."

"We actually bought it, it was in a warehouse," Stewart retorted.

The president's theme of change from the 2008 race resurfaced during the show, along with a popular campaign slogan.

Noting the tough election climate, the president said he hopes Democratic members of Congress are rewarded on election day for the tough votes they took on health care and financial regulatory reform.

Near the end of the interview, Obama invoked his famous campaign phrase, "Yes we can, but it's not going to happen overnight," prompting a laugh from Stewart.

CNN's Ed Payne and Padma Rama contributed to this report.