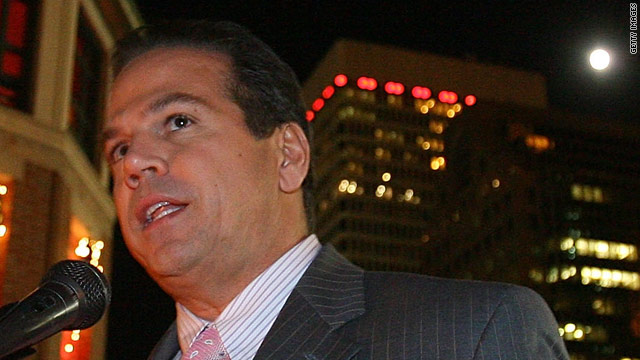 Cicilline, the mayor of Providence, is up by double digits in the polls, holds a fundraising advantage against his competitor, Republican John Loughlin II, and has received a slew of endorsements.

And he has the help from the Democratic big guns. On Monday, President Obama stumped in the state for the Democratic Congressional Campaign Committee, lending support for Cicilline, among others.

If elected, Cicilline, 49, would be one of four openly gay members of Congress -- joining the ranks of Democratic Reps. Tammy Baldwin of Wisconsin, Barney Frank of Massachusetts and Jared Polis of Colorado (assuming they win their re-election bids).

Robin Brand, deputy executive director of the Gay and Lesbian Victory Fund, said her nonpartisan political action committee decided to endorse the mayor mainly because of his leadership track record.

"He had been a successful state legislator, successful mayor and really came out of the starting gate as the front-runner in this race," Brand said. "He is a really strong campaigner."

But he still has work to do, according to the nonpartisan Cook Political Report.

The report deems the district "Lean Democrat." It previously changed its ranking in September from "Likely Democrat" to "Lean Democrat" after Cicilline was forced to acknowledge that the city had "improperly given him pay raises as mayor between 2006 and 2009."

It's a point that Loughlin was able to capitalize on.

Cook Political Report points out that while Loughlin has begun to rip into Cicilline's record as mayor, "Cicilline still enters the homestretch in reasonably good shape. ... Loughlin doesn't have a ton of money left, and Cicilline is ahead anywhere from one to two dozen points in public polling."

Brand said that Cicilline's record on gay and lesbian issues is hardly a reason why he may appeal to a large swath of Democratic voters in the district, a seat now held by Rep. Patrick Kennedy, a liberal Democrat, who isn't seeking re-election.

Cicilline's "focus has been on the issues that people care about right now, which is economic development and jobs," she said. "He has a strong reputation for building Providence's economy and I think that focus for him has really been what has propelled him to the front of this race and put him in a really strong position to win this seat on November 2."

The state's largest newspaper -- The Providence Journal -- is also supporting him.

The paper's endorsement reads: "Mr. Cicilline has been an honest, energetic and often innovative mayor. ... He has cleansed city government of much of its reputation for corruption and hired capable people. ... He has brought a level of fiscal discipline (including in relations with the city's far too powerful public-employee unions) that has not been seen in the city for many decades."

Read more of the endorsement

Perhaps the most likely reason that Cicilline can win, Brand added, is that voters are less likely now to care about a candidate's sexuality because of the economic problems facing the country.

Mr. Cicilline has been an honest, energetic and often innovative mayor.
--The Providence Journal endorsement

"Ultimately, voters vote for candidates who are going to help improve their lives. It doesn't matter if you're gay or lesbian," she said. "If you've demonstrated that you've helped improve people's lives on the issues they care about, our research shows that being openly gay or lesbian is really secondary to that."

And that's certainly the case for Laure Rondeau, an elderly Catholic woman in Providence, who told NPR that sexuality doesn't play a factor in her vote.

"[Sexual orientation] doesn't bother me at all,'' Rondeau said in the interview. "He's been a good mayor of Providence, and I think he'd do well in Congress.''

In many ways, his sexuality may be a plus to some voters angry at Washington's backroom deals and candidates deemed distant, out of touch and dishonest, Brand said.

"It's clear that it may not be easy to run as openly gay or lesbian, but they are being open and honest about who they are," she said. "Voters really respect that, and I think that, in some ways, can really be an advantage especially in times like this."

Across the country, another openly gay House candidate -- backed by the Victory Fund -- is hoping to ride that same wave.

While the incumbent's poll numbers are high and fundraising dollars continue to pour in, political observers note that she faces a challenge this year from Pougnet -- a well-liked politician who has a husband and two children.

"Bono Mack remains strong here because she is one of the most moderate members of the California delegation," according to Cook's analysis. "Now, they finally have a credible candidate in Palm Springs Mayor Steve Pougnet, who is receiving the kind of national support that past nominees have not enjoyed."

The report goes on to say that Pougnet remains a "heavy underdog" because of the GOP lawmaker's moderate voting record. (She was one of eight Republicans to vote for Democrats' "cap and trade" energy bill.)