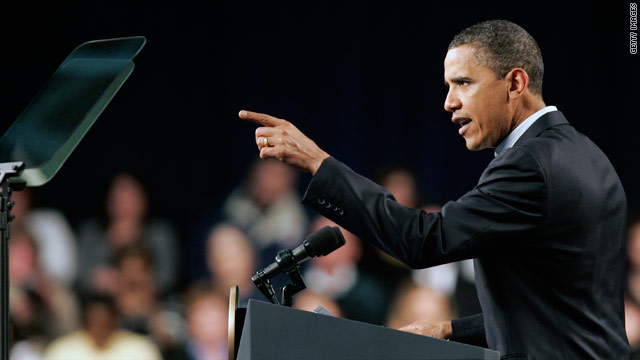 Washington (CNN) -- As Election Day gets closer, the rhetoric gets more intense, interesting and, shall we say, passionate. Here are some things you might have missed.

Don Cordell, an 83-year-old retired engineer from California, plans to run against President Obama in 2012. Cordell told AOL News that he is a distant cousin to 22 presidents -- including George W. Bush, Obama and George Washington, to name a few.

Nevadan Joyce Ferrara told CNN affiliate KVVU that when she went to vote, Senate Majority Leader Harry Reid's name was already selected. An election official claims there is no fraud.

'He had me at hope and change'

The College Republican National Committee, in a new video entitled "Break Up," says it wants to put an end to its relationship with President Obama. Wait -- they've liked him this whole time?

Obama cut out of a fundraiser in Rhode Island on Monday night, according to the Provindence Journal, saying that he couldn't stay for dinner because he had to "go home to tuck in the girls and walk the dog and scoop the poop."

Sean Bielat, the Republican taking on openly gay Democratic Rep. Barney Frank in Massachusetts, is under fire for telling the Boston Herald that gays and lesbians don't have the right to serve in the military, just as short people don't.

Picture of the day: He's not having any of it

A police officer assigned to President Obama's Moving America Forward rally at the University of Southern California appears to be having a bad day in a Getty Images photo of the rally.

Campaign Valley of the Dolls

Two well-publicized candidates -- one known for her unique name (Krystal Ball) and the other for his Rent Is Too Damn High party (Jimmy McMillan) -- have received a special honor, according to POLITICO.com: getting their own action figures made.

A staffer for Reid no longer works for the senator, amid reports the staffer orchestrated a sham marriage in order to provide a Lebanese man with American citizenship, a spokesman for Reid said.