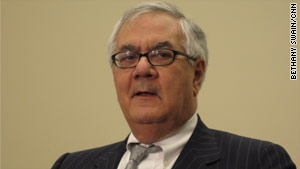 A political group called GOProud is targeting a number of Democrats in ads, including Barney Frank of Massachusetts.
STORY HIGHLIGHTS

(CNN) -- A political group of gay conservatives will begin airing ads against a handful of Democratic candidates on Monday, including a spot against openly gay congressman Barney Frank of Massachusetts.

In a statement, GOProud declares that this is "the first time ever a national gay organization is airing a television advertising campaign going after Democrats."

"Barney Frank is an absolute embarrassment," said Christopher R. Barron, Chairman of GOProud's Board of Directors. "He represents the worst kind of Washington politician."

In addition to Frank, the $50,000 purchase of airtime by GOProud will pay for ads against House Speaker Nancy Pelosi and Sen. Barbara Boxer (D-Calif.), two progressives who pride themselves as champions of gay rights.

The group will also run commercials in support of Rep. Charles Djou (R-Hawaii), a freshman who was one of five House Republicans who voted to repeal "don't ask, don't tell."

All of the ads will air on the Lifetime and Bravo channels, whose demographics have a large share of women and members of the LGTB (lesbian, gay, bisexual and transgender) community.

Citing "out of control debt, runaway spending, and the loss of millions of jobs," GOProud Executive Director Jimmy LaSavia says the advertising campaign "will show the American people what the real Democrats of Washington, D.C. are all about and make it clear, that under Democrats, reality bites."